Today, I want to home in on the sector that’s revolutionizing healthcare as we know it… biotech.

Since biotech companies work at the cutting edge, some investors simply put these stocks into the “difficult” basket.

There can be long lead times from the research phase before achieving a final product… if there’s any final product at all.

Trying to sort through the science and pick which stock will ultimately prevail is simply beyond the scope of many investors.

That’s why when it comes to trading this sector, sometimes it’s easier to go with an exchange-traded fund (ETF) than picking individual stocks…

My favorite is the iShares Biotechnology ETF (IBB). 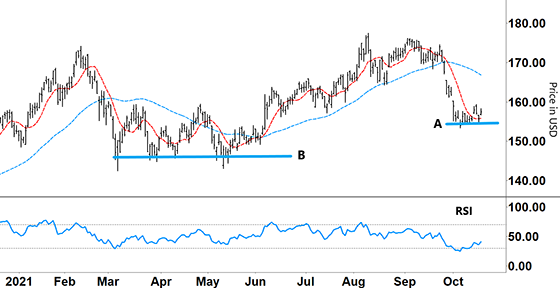 From there, it traded in a sideways range for several months before breaking higher at the start of June. But, after briefly establishing a new high ($177.37) in August, IBB fell again.

After attempting to rally again into September, IBB ran out of steam. So, it rolled over, along with the Relative Strength Index (RSI).

In June, you can see the 10-day moving average (MA – red dashed line) crossing up through the 50-day MA (blue dashed line).

This confirmed the start of the uptrend…

But in late September – almost four months later – this uptrend came to an end. That’s when the 10-day MA crossed down over the 50-day MA.

After dropping heavily through September, IBB began to establish a base around October 6. That’s the light blue horizontal line (A) around $153.

Since then, it’s been consolidating and forming a short-term support level. And now, IBB is starting to move slightly higher…

You can see how this recent consolidation is reflected in the 10-day MA (red dashed line). After falling steeply, the 10-day MA has recently flattened out.

As we know, the longer a share price holds a level, the stronger that level becomes. Although it’s still early, IBB is managing to stay above this short-term support.

Another thing adding support to IBB’s share price right now is the RSI. It too bottomed out on October 6 – going into oversold territory (below 30) – and has recently turned higher.

Right now, the RSI shows that buying momentum is increasing. If this momentum continues, we can expect IBB to rally higher from here.

The first test then requires the 10-day MA to break back above the 50-day MA. If this happens, that would show a new uptrend emerging… and it might also give us the opportunity to go long.

The first price target for IBB is the high from this September at $176.

However, if IBB fails to hold this short-term support (A), that brings the next lower level (B) into the picture ($145). This is also the base that IBB formed after coming off the February high. It rallied from this base right up to its all-time high at $177.37…

Right now, however, holding short-term support is the key to a future rally… and potential trade.

Of course, if you have the skills and knowledge, picking individual biotech stocks might be the way to go. However, for many investors, it can be a low probability way to trade.

By sticking with a sector ETF like IBB instead, it allows you to focus your sole attention on picking direction… and that’s a much simpler way to trade.

I enjoy reading your analysis and rationale on what to follow when deciding upon a trade.