It’s hard to think of any company that has captured investors’ minds like Tesla (TSLA). Led by its colorful (and quotable) CEO, Tesla is never far out of the news.

Despite being a pioneer in electric vehicle (EV) manufacturing and battery storage technology, Tesla represents far more than just its eco-friendly credentials. For them, it’s the company that distinguishes the new world (and economy) from the old…

Why else would Tesla’s market cap hit $1 trillion for the first time in October… while Ford and General Motors (GM) combined was just a fraction at around $160 billion?

However, after peaking at around $1,240, Tesla’s share price has been sliding recently.

In the chart below, you can see the sharp sell-off that soon followed that peak as we headed into November… 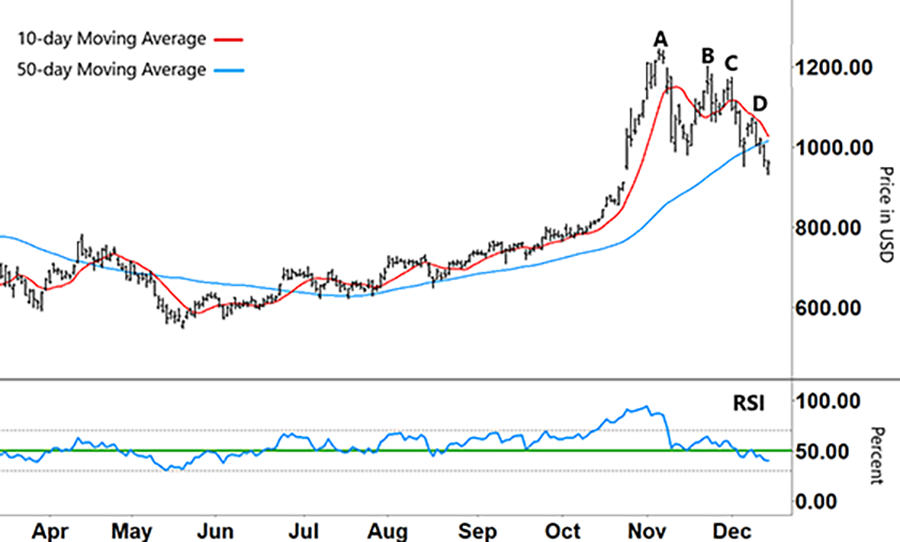 Along with founder and CEO Elon Musk selling billions of dollars of his own personal holdings, the TSLA share price has dropped 25% from its high (A) in just a couple of months.

After bouncing twice off the $1,000 level – coinciding with the Relative Strength Index (RSI) also bouncing off its support (green line) – Tesla tried to rally again but ran out of steam at ‘B’.

From there, it made a lower high at ‘C’ before momentum (RSI) broke below its support and that support line changed into resistance.

When the RSI soon retested the green line but failed to break higher – along with the Tesla share price hitting ‘D’ (another lower high) – Tesla’s share price continued its fall.

Given the relationship between Tesla’s share price and the RSI, this break below the RSI’s support represents a major change of events. When Tesla began to move higher from June, the RSI remained in the upper half of its channel throughout the entire rally.

With momentum (RSI) continuing to fall and the RSI in the bottom half of its channel, the next test is to see what happens if the RSI goes into oversold territory (below the lower grey line on the chart)…

The last time this happened was in May 2021. Back then, when the RSI subsequently rose and broke back through that resistance/support line in mid-June, that coincided with the start of the rally.

When the RSI broke higher in mid-June to commence that rally, the short-term 10-day MA (red line) also broke up through the long-term 50-day MA (blue line). And that’s where it stayed for the entire duration of the rally.

As you can see on the chart, the 10-day MA is now on the verge of breaking back down through the 50-day MA. That would be a bearish signal.

Once again, that would bring the RSI back into play…

If the RSI remains in the lower half of its channel – and the 10-day MA crosses down and stays below the 50-day MA – then this current down move could have a long way to go. If the fall accelerates, then the next test for Tesla is around $800.

That would represent a one-third drop in Tesla’s share price since November and mark a major correction.

Of course, long-term Tesla shareholders are used to volatility. But after such a meteoric rise, this current pullback might only just be getting started.