As soon as a stock breaks out in one direction, it quickly turns around and heads the other way.

Not only is this frustrating, but it can also start to burn a hole in your trading account.

That’s why instead of trying to hunt out the next big move, I look for stocks that have shot too far in either direction…

Then, I aim to profit when they revert to the mean.

Last week, we looked at a stock doing exactly that – the Utilities Select SPDR Fund (XLU).

After rallying into early June, XLU quickly reversed. And on June 23 (red arrow on the chart), it retested its yearly lows.

Today, I’m going to discuss what’s happened since that move and what we can expect from here. 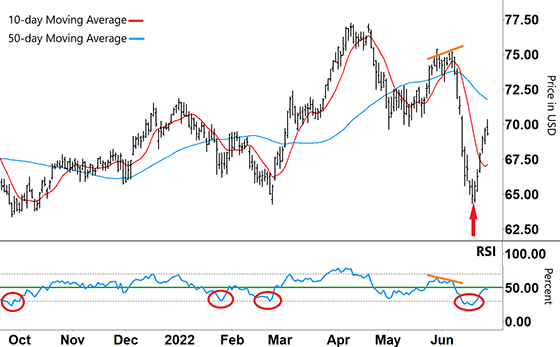 After a strong rally from February through March, XLU ran into resistance in April.

Then, after that selling pressure began to wane, XLU formed a base through May from which it showed promising signs of a new rally.

First, the RSI had broken through resistance (green line) and into the upper half of its band.

Second, the 10-day moving average (MA – red line) had just broken back above the 50-day MA (blue line). This was another bullish signal.

See what I mean about this volatile market?

On the chart, you can see how divergence (orange lines) between the stock price and RSI sent XLU lower.

The steepness at which the 10-day MA broke down through the 50-day MA shows the viciousness of that selldown.

But when we checked XLU last week, we saw how that huge selloff pushed the RSI well into oversold territory (lower grey dashed line). Meaning, XLU had been sold down too far.

And after the RSI formed a double ‘V’ out of this oversold territory, a break back toward resistance (green line) would likely see XLU rally.

That’s because if you look at similar patterns on the chart, the red circles show XLU went on to rally in each previous case.

Now, with the current move, XLU has rallied almost 10% in just over a week. That put the RSI back up around resistance.

So, what should we look for now?

Well, after such a sharp bounce off its June lows, what happens next around the RSI’s resistance is key.

For the emerging uptrend to continue, the RSI needs to break back into the upper half of its range and stay there.

However, if the RSI fails to break higher, this emerging rally could quickly run out of momentum.

Just like its previous two rallies that peaked in April and early June, we could see XLU reverse sharply again. And that could provide the opportunity for a quick short trade.

Then, a fall back to XLU’s June lows could quickly play out.

Right now, trying to get onto a big trending move is a low probability trade. You can only trade what the market gives you.

Instead, we need to look for stocks that overshoot. Then profit off them when they revert to their mean.

What other overshooting stocks in the market do you think have trade potential?