One “old economy” stock that has benefited enormously from the rotation out of Big Tech is Caterpillar (CAT).

Along with most other stocks in the Dow Jones Index, CAT has been on an absolute tear recently…

From its late September low to its recent high, CAT shares have rocketed by 50%. That’s a huge move for any stock – especially an old economy stock – in such a short time.

The move has also propelled CAT to its highest level this year – just a fraction below its all-time high from June last year ($246.69).

However, so much buying momentum has also put the stock into overbought territory.

With CAT now straining to maintain those highs, today we’ll check out what’s in store from here…

Warning Signs of a Potential Reversal

It experienced a sideways, rangebound pattern in the first half of 2022. Then it drifted lower from June through September. Recently, a rally began to gather momentum around mid-October.

Check out the chart… 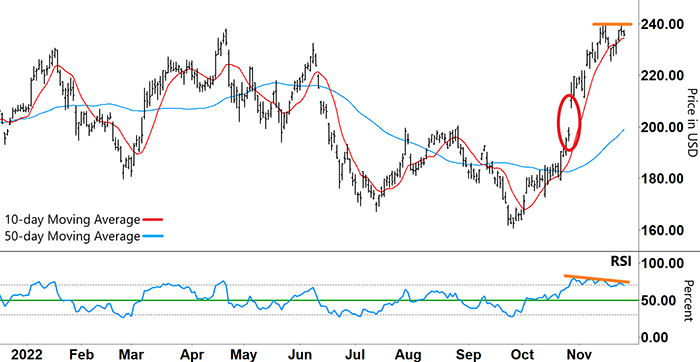 However, the recent price action has thrown up a couple of warning signals…

After hitting its recent high on November 14, CAT retraced lower before again trying to rally higher. But this time, the rally petered out when CAT ran into resistance (upper orange line).

For CAT’s rally to resume, it first needs to break above this price level (resistance) and hold it.

The other warning sign relates to the RSI (lower orange line).

As you can see, the RSI has been trending lower… while CAT’s stock price has been struggling to break above resistance.

So, what am I expecting around here?

Looking for a Reversal Off Recent Highs

We saw that with CAT’s current rally as the RSI tracked all the way from oversold right up to overbought territory.

However, when buying momentum fizzles out or reverses, that leaves the stock vulnerable to a potential fall.

And a potential mean reversion trade…

If the RSI continues to track lower, then we can expect to see CAT also reverse lower off its recent highs.

A move by the RSI back toward support (green line) could then provide the setup for a potential short trade.

If the 10-day MA reverses and starts tracking back toward the 50-day MA (and eventually crosses below it), then that would add further confirmation to an emerging down move.

Which way do you think CAT will move next?