There are all kinds of correlations that exist in the market. And as a trader, it’s important to know what these are.

The reason is simple…

If the price gap between two related products gets too far out of whack, the markets will eventually push them back to their normal range…

And that can provide some great trading opportunities.

For example, if the oil price rallies but oil stocks lag, you can expect them to eventually catch up.

We took a deep dive into gold last Wednesday when we checked out the SPDR Gold Shares ETF (GLD) – an ETF that tracks the gold price.

Today, I want to add another gold ETF to the chart. This time, though, one that tracks gold mining stocks – the VanEck Gold Miners ETF (GDX).

I’ve overlaid the two charts to show you how they move in relation to each other. So, let’s check them out… 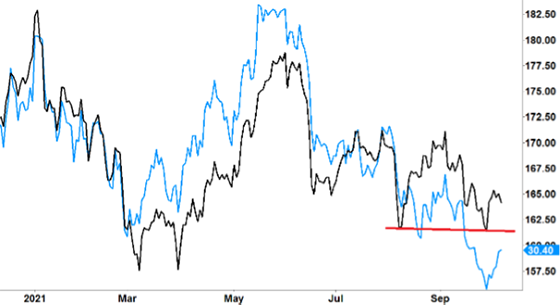 There’s a lot going on in this chart, so let’s unpack it…

As you’d expect, given the obvious importance of gold’s price to a gold miner, you can see how closely the two lines track each other…

That happened all the way through the three major moves on the chart: down from January to March, up from March to June… and then down from June until recently.

Now, we’re looking for nuances within this direct correlation that we can trade…

First, if you look closely at the third move down (from June onwards), you’ll notice that GDX went from trading at a premium over GLD to a discount. That is, from above the black line to below it.

In other words, when the gold price fell, gold mining stocks fell further.

Another thing you’ll notice is the size of the gap between the two lines.

This gap peaked in May and June (with GDX above GLD) before the move down… and peaked again last month (this time with GDX below GLD).

This tells me that if the gold price was to turn around and rally, we might expect this gap to close up again. So, while both GDX and GLD would rise, we could expect GDX to rally stronger than GLD.

That’s an important piece of information for a trader.

That’s why what happens next with GLD is key.

You’ll notice that there’s a red support line for GLD. This represents a level ($161) that GLD held on August 10 and tested again (and held) on September 29.

However, while GLD held support, GDX (blue line) continued to fall. That’s what has led to the current disparity.

But there lies our trading opportunity…

If GLD continues to hold support and rallies, it might be GDX that benefits the most from this price disparity.

If GLD rallies, GDX could rally even stronger, giving us a more profitable trade.

Right now, it’s still early… we’ll have to keep watching to see how it pans out. But it could provide a promising trade for the future.

We all know that trading is about trying to gain an edge. That’s what puts profits in your trading account.

By studying correlations – how stocks or commodities move in relation to each other – you can firmly put the odds in your favor.