It doesn’t matter if it’s a stock, commodity, or even the market in general…

When everyone starts singing the same tune, history has shown that a change of direction is usually not far away.

And over this past month, that’s what we’ve seen with oil…

Spurred on by a flurry of sky-high predictions from some of the biggest investment banks and brokers – on top of growing tensions on the Ukraine-Russian border – oil has become a very crowded trade.

As I’ve warned previously, when it comes to oil, sentiment (and price) can change quickly.

But today, I want to look beyond the headlines and focus on what the chart is telling me.

So, let’s take a look at the Energy Select Sector SPDR Fund (XLE). 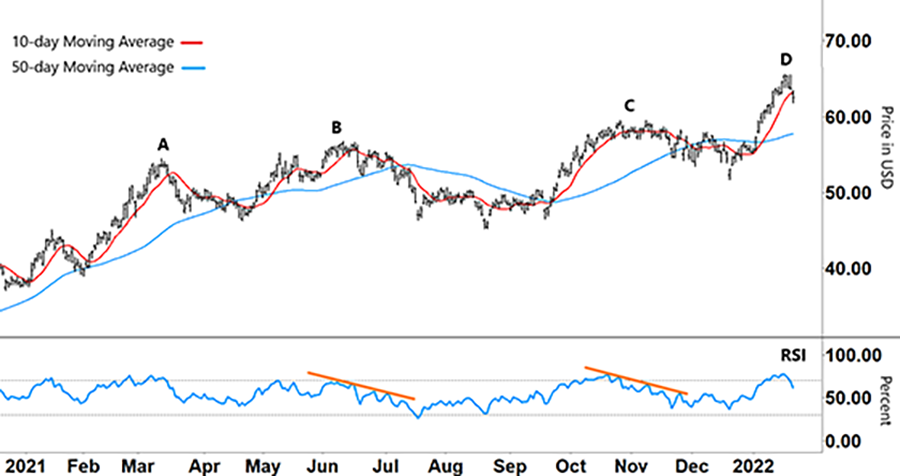 You can see that the most recent breakout began right around the start of this year. That’s when the short-term moving average (MA – red line) broke above the long-term 50-day MA (blue line).

As the chart shows, it was a rapid run higher….

However, as the Relative Strength Index (RSI) at the bottom of the chart shows, that sharp move higher put XLE right into overbought territory. After forming an inverse ‘V’, the RSI headed lower, bringing the XLE share price with it.

While it’s still early in an emerging down move, the action in the RSI will be key in determining the direction of XLE.

If the RSI continues to slide (showing declining momentum), then we can expect to see short-term weakness in XLE’s share price. After such a strong and sharp move higher, any pullback could also be swift.

When XLE peaked at ‘B’ and ‘C’, the RSI was close to (or in) overbought territory. As you can see, the RSI’s subsequent drift lower (two orange lines) was quite slow and steady.

In both cases, this produced a gradual fall in the share price.

By comparison, the more dramatic initial fall in the RSI at ‘A’ also saw a stronger fall in the shares. If we see a repeat of the action from ‘A’ with the current move, then we can also expect to see a sharper correction (compared to B and C).

The other clue lies with our MAs.

The highs at A, B, and C coincided at (or closely with) the 10-day MA and the 50-day MA being the furthest apart. The share price then fell as the gap in the MAs contracted.

Right now, similar action between our two MAs would be a further confirmation of an emerging pullback – and provide the opportunity for a short trade.

Remember that markets typically overshoot in either direction. When this happens, our goal is to try and profit off of any correction (or countertrend) to that initial move.

After the big selloff we saw last week – and the associated increase in volatility we’re now seeing – these overshoots are going to happen much more often (and be more pronounced) as we move further into the year.

What are your predictions for XLE this year?