Well, it’s certainly been one crazy ride for precious metals this past week.

Both gold and silver have been all over the news.

Many investors are left wondering what the future holds for precious metals.

Then, last Friday, gold saw a wave of selling.

This flowed into Monday, when gold traded below $1,680 per ounce before recovering to around $1,725.

You don’t often see 7% swings in gold over just a few days.

I wrote about this gold price action on Tuesday. We looked at how the Relative Strength Indicator (RSI) was showing SPDR Gold Shares ETF (GLD) to be oversold. (I’ll talk more about the RSI later on.)

I also mentioned that a potential long gold trade could be shaping up.

Having looked at gold, it’s now time to turn our attention to silver. We’ve spoken about gold’s relationship with silver in the past.

While gold was being hammered this last week, silver fared even worse. At one point, silver was down over 11% before buyers came in, pushing it higher.

You can see the price action for yourself in the chart below.

It’s a chart of the iShares Silver Trust (SLV) – an ETF that represents the silver price. 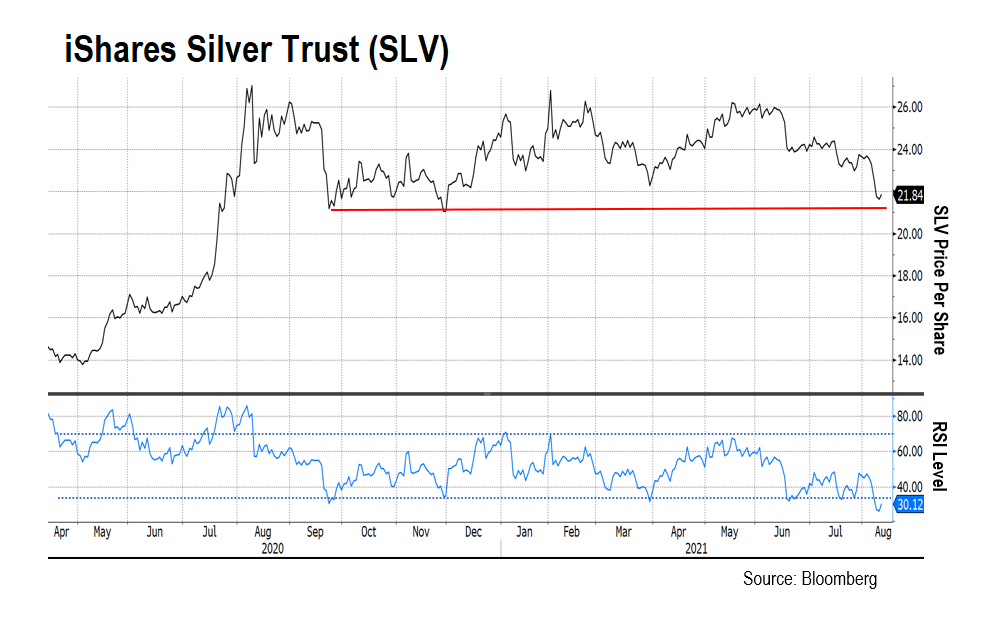 After reaching a peak in August 2020, SLV then retraced. As the chart shows, SLV has been trading sideways for almost a year.

The red line on the chart represents the bottom of that trading range – otherwise known as the support line. As you can see from the recent price action, SLV is bearing down close to support.

The longer a support (or resistance) line holds, the stronger it becomes.

Having been range-bound for so long – in SLV’s case, almost 12 months – this upcoming test of support will become highly important for its next move.

When a stock breaks out of a trading range, it can move in a big way. That applies on the way up and the way down.

If SLV were to break below the red line, that could result in a big down move. It’s the type of price action that can often bring short sellers into the market.

If support for SLV holds, a strong bounce back to the mean could play out instead.

In other words, with the current price action, two different trade setups could be in the making. You can now see why I follow support levels so closely.

As I mentioned earlier, I also closely follow the RSI, which we looked at on Tuesday. That’s the blue line below the price chart.

Let’s take another look at the chart, this time paying attention to the RSI.

Right now, the RSI is in oversold territory. While that’s a handy clue, by itself it’s not enough to place a trade.

Ideally, I’d like to see the RSI break back up through that lower horizontal line.

If that happens, and SLV holds support – that is, the share price stays above the red line on the chart – then I know that we could have a great setup for a trade.

To me, price levels and RSI go hand in hand.

And with gold and silver now trading at critical levels, you can be sure I’ll be watching both closely for potential trades as both indicators are setting up a good position to buy.

I’d like to thank all of you who’ve written in about my e-letter, here’s some responses from a few readers…

Your e-letter is good way to start the day! Gives me some focus. Thanks.

Good morning. I think the newsletter is GREAT. I am 53 years old and learning all I can about options before I actually dive in with my money. So for someone learning, I think it’s excellent. All the best.

I really enjoy reading Larry’s views on the market and guidance on becoming a better trader/investor.

Just focusing on putting a “P” on the page for example has been one great strategy on some other profitable trades rather than always going for a home run. Best.