Over the past couple of weeks, we’ve applied my mean reversion strategy across different sectors of the market to find profitable trade setups.

Today, though, I want to dive a little deeper.

So, let’s look at one of the technical indicators that I use alongside mean reversion.

The goal of the RSI is to gauge momentum. Put simply, momentum lets me see whether a stock is overbought or oversold.

If buyers push a stock too hard, the resulting rally will inevitably bring in sellers. That’s why you see pullbacks even in the strongest rallies – it’s simply too tempting for some investors not to sell at highs.

It’s a similar story with an oversold market. If sellers panic and dump their stock, the price dip will likely bring in buyers looking for a bargain. In the short term, this can drive a stock price higher.

When either happens – causing a change in momentum – the RSI can provide clues when to enter or exit a trade.

To see what I mean, let’s go back to a similar chart we looked at just over a week ago. It’s a chart of the SPDR Gold Shares ETF (GLD) – which aims to match the gold price. 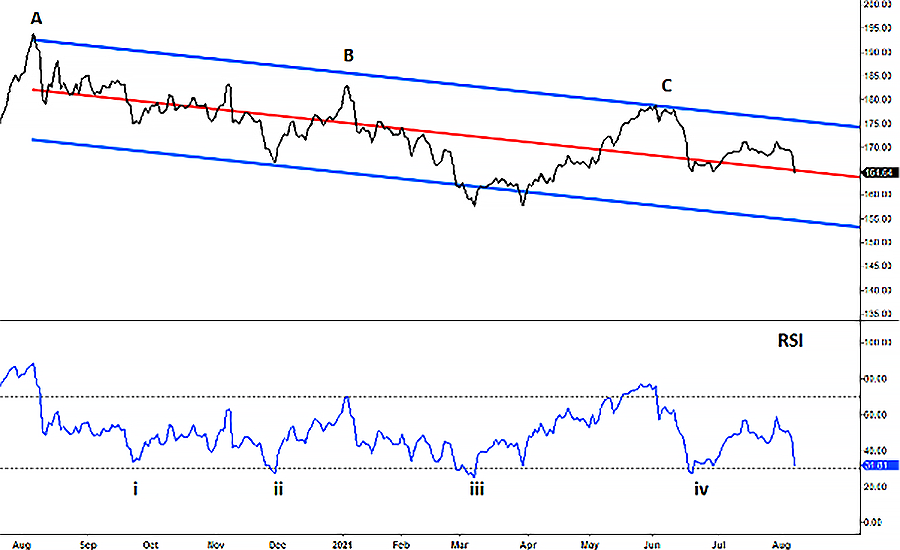 On the chart, you’ll see the familiar red and blue lines we’ve looked at before. The red line represents the trend line, with the upper and lower blue lines capturing the majority (95%) of the price action.

You’ll also notice that I’ve added the RSI indicator towards the bottom.

On the price chart, I have placed an A, B, and C where there have been major price reversals and GLD moved lower. Now match those points against the RSI below it.

As you can see, these major reversals have occurred when the RSI was showing GLD to be overbought. That is, on or above the upper dotted line on the RSI.

You’ll also notice that I’ve placed a i, ii, iii, and iv on the RSI where it shows GLD to be oversold. Now compare that to the subsequent action on the price chart above.

The GLD stock price rallied just as the RSI indicated it was oversold.

You can see just how closely the RSI and stock price follow each other. The more you look, the more of these match ups you will see.

If the RSI is indicating an overbought or oversold position, there’s a strong possibility that a move has lost momentum. And that means a stock could be about to change direction.

Remember, we’re not hoping for a once in a lifetime move with our strategy. Instead, we’re trying to profit from many smaller moves and put a “p” on the page.

Right now, you’ll notice that the RSI is heading back down to an oversold position. That means a potential long trade in GLD could soon be shaping up.

Trading is a game of probabilities. But, by using the RSI as a key alongside my mean reversion strategy, you can put the odds (and profits) firmly in your favor.