One of the biggest topics we’ve covered over the past few months has been the pandemic and its results on the economy. In particular, we’ve looked at the dramatic increase in consumption since the pandemic started.

With millions stuck at home, many took the opportunity to upgrade almost everything from their laptop and headphones to their cars.

And it wasn’t just here in the U.S., demand for goods soared around the globe.

But as those who tried to buy a new car and many other goods found out… they might be waiting for a while. That’s because the spike in demand, coupled with a lack of workers, led to a global shortage in an essential component: semiconductors.

That’s left many manufacturers unable to fulfill the sheer amount of orders.

For example, both Ford and General Motors (GM) blamed the shortage for a dramatic loss in production numbers and sales just last month.

While extra semiconductor capacity is being added, there’s no quick fix… It costs tens of billions of dollars to build a new plant and construction can take up to three years.

Until that extra capacity is added – and/or demand for goods drops – the shortage will likely run well into 2022.

To get a better idea of how this action has unfolded, let’s pull up the chart of the VanEck Semiconductor ETF (SMH)… 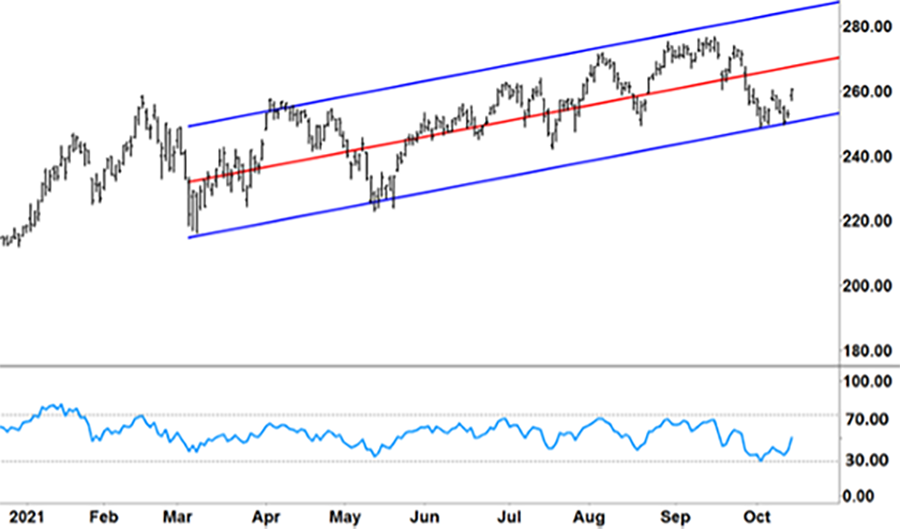 That made for a handy 130% gain in just over nine months.

But as you can see on the chart, SMH’s pattern began to change…

While SMH continued to trend higher throughout this year, the uptrend became less steep. That’s shown by the gently rising red line on the chart.

The two dark blue lines on either side of the red trendline represent 95% of the price action over this time.

Apart from trading very briefly above the upper blue line in late March – and briefly below the lower blue line in May – SMH has traded tightly within this range.

As regular readers will know, this type of chart pattern throws up plenty of trading opportunities for mean reversion trades.

We saw that in March and again in May when the SMH share price bounced off the bottom of the trading channel (lower blue line) and reverted to the mean (near the red line).

More recently, it’s the price action over these past few weeks that I’ve been watching. A similar pattern could be repeating…

Throughout September, SMH was pushing right at its all-time highs (around $277).

But take a look at the Relative Strength Index (RSI) at the bottom half of the chart, with the light blue line. Although the RSI wasn’t showing SMH as overbought, it was still making inverse ‘V’ shapes.

SMH then fell, along with the rest of the market, from September going into October. And on October 4, SMH looked to be on the verge of breaking below the lower blue line.

However, it held support, as the RSI formed a ‘V’…

After gapping slightly higher, SMH traded down and tested the lower blue line again… and held.

With the RSI trending up – and showing momentum on the rise – SMH could soon be heading back towards the middle of the trading channel (near the red line).

That could provide an opportunity to capture another mean reversion trade.

I have no doubt the shortage in semiconductors will continue to make the news. So, you can expect lots of news articles speculating on when the shortage will end.

In the meantime, however, I know what I’ll be doing… I’ll have my eyes glued to the chart so that I can scout out future trades.

I’m grateful to receive more kind words from my readers…

I’m happy to let you know that we’re making money. Thanks for helping us reach our financial goals and freedom.

I’m really enjoying your newsletter. It’s very informative and educational. I’ve archived all the newsletters so I can refer to them. Keep up the good work. Thank you.

Thank you for your essay on QQQ, this was very helpful to get the insights.