With all the attention given to the mega-cap tech stocks, it’s no wonder that some investors see them as the only game in town.

After all, some of these companies – like Amazon or Apple – have generated outsized returns for decades.

However, focusing on just one sector of the market can cause you to miss other opportunities. Some of which might be currently leaving tech stocks in their wake…

One of those opportunities is the financial services sector.

One way I keep track of this sector is through the Financial Select Sector SPDR Fund (XLF). Right now, the chart is showing that XLF is pressing up against a key resistance level.

When the rest of the market rallied hard last year, XLF was left behind.

In fact, XLF struggled to break out of its range for much of this year too.

After playing catch-up from last November to this May, XLF’s chart pattern changed… 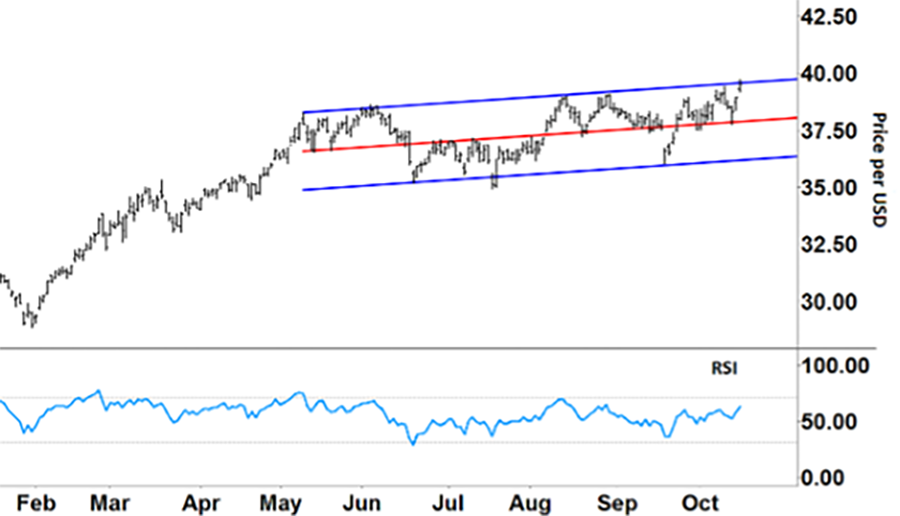 After a steep rally in the beginning of the year, XLF transitioned from a strong uptrend to a range-bound market… But now, the red trendline shows XLF is creeping up gradually.

The two dark blue lines on the chart represent where 95% of the price action has taken place. And apart from two days in July, XLF has stayed above the lower blue line.

It’s a similar story on the upper side of the channel. XLF pushed right up against this level in the first week of June, then fell. It then tried to break up through it twice in August, but also failed.

As you can see, however, this upper level has come into play again. So, XLF is now trying to break higher out of its range.

Regular readers will know that if a stock breaks through a resistance line, that can change into a new support level (and vice versa).

And that’s what I’ll be looking for in XLF over the next week… If XLF can break above this upper band (dark blue line) and hold, it could go on to rally further from there.

Let’s take another look at the chart, this time focusing on the Relative Strength Index (RSI) at the bottom…

If XLF continues to rally, the next test will be how its share price reacts to any potential overbought signal from the RSI (over 70).

Berkshire Hathaway is due to release its results in a couple of weeks (though no firm date has yet been set). A strong result here could really help propel XLF higher.

In the meantime, however, our immediate focus remains on how XLF trades around the upper band of the trading channel…

If XLF fails to break higher (and hold this level), then all eyes will be on the RSI.

An overbought signal from the RSI – along with XLF dropping lower after hitting resistance – could soon see XLF reverting to the mean. And that could provide an opportunity to go short.

Either way, the price action around the upper trading band – along with upcoming profit results – will set XLF’s chart pattern for the coming month.

Even after rising 60% over the last year, there could still be plenty of trading opportunities in XLF ahead.