In the competitive world of trading, every trader needs an edge.

That’s why over the past couple of months, I’ve written about some of the technical indicators I use.

By now, you’re probably familiar with the Relative Strength Indicator (RSI) and moving averages, for example.

Instead, it’s an index – the CBOE Volatility Index (VIX).

I explained how the VIX works when we first checked it out in August. It’s useful in determining a change in market direction.

Today, since volatility is on the rise, let’s take another look at the VIX and what that means for the S&P 500… 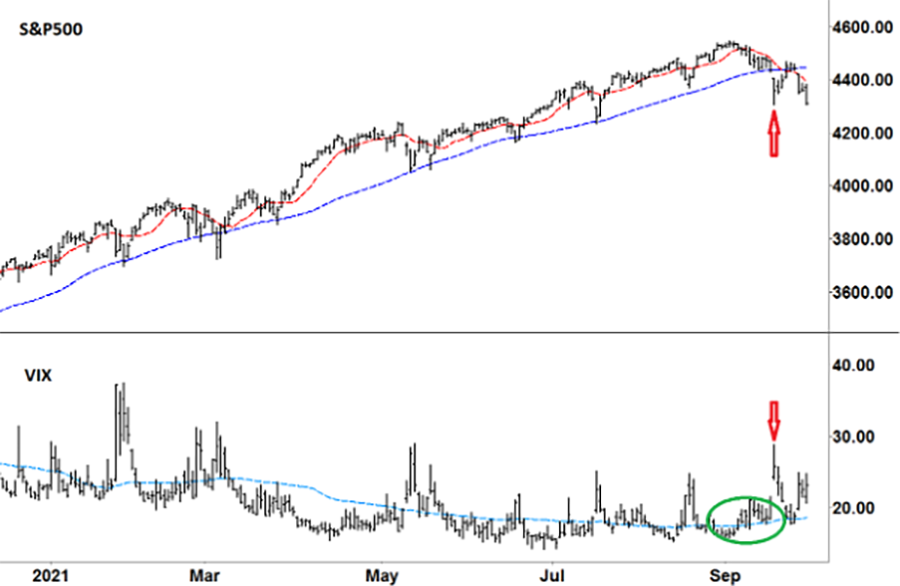 From the start of the year, the long-term trend (the 50-day MA) has been up.

However, all that changed on September 22, when the 10-day MA crossed down over the 50-day MA.

The bottom half of the chart shows the corresponding movements in the VIX. As the chart shows, when the VIX spikes, it has coincided with the SPX turning down.

Quite clearly, understanding this relationship between the two can be a very powerful tool. That’s why I look at the VIX daily.

However, sometimes the VIX can spike very quickly… and towards the end of the initial down move in the SPX.

That’s exactly what happened with the recent spike in the VIX. The tip of the spike (red arrow) came well after the SPX began moving down.

If you entered a short trade right at the tip of the spike in the VIX, the market would have rallied right against your position. From that red arrow, the SPX rallied for over a week before again turning down.

On the chart, I’ve added a 50-day MA (blue dashed line) to the VIX. It shows us the long-term trend – the average level (or price) over the preceding 50 days.

And because of that, we can use it as a baseline.

If you look at the action of the VIX through September, you’ll notice that it began climbing right at the start of the month. That is, from below its long-term average to above it (the green circle).

In other words, the VIX began trending higher a long time before its spike.

If you look back over the chart, you can see similar patterns in February, May, and July. Including September’s action, this pattern has repeated four times so far this year.

In each of these occasions, the VIX began trending higher (before it spiked), coinciding with the SPX moving down.

So, can you now see why I watch the VIX everyday?

By watching the VIX daily, you can get a feel for how it’s tracking against its long-term average.

And, as we have seen today, often the VIX will begin trending higher well before it spikes.

For a trader, this knowledge is crucial because it gives us more time to get ahead of the next move. So, make sure to keep an eye on the VIX before you decide to enter a new trade…

I’d like to thank the readers who’ve written in about my e-letter, here are some of the latest responses I’ve received…

Larry, I enjoy your blow-by-blow essays. I learn a lot from them, and it’s always fun to learn. Keep it up.

Great stuff! Excellent information to use in any investor’s education to increase trading intelligence.

Hello, Trading With Larry Benedict is succinct, well written, and INTERESTING! Thank you for a letter that I find myself looking forward to reading.

I enjoyed the newsletter. It contained good information and was to the point. I’m looking forward to the follow up.