If stock investors think they’re having a tough time, then they should spare a thought for crypto traders.

Since peaking in November 2021, bitcoin and Ethereum have lost more than two-thirds of their value.

Even the once high-flying Dogecoin is trading at less than one-sixth of its former price.

And with tighter regulations in the cards and major crypto exchange issues, it’s fair to say this high level of volatility will continue for some time.

But while this volatility poses challenges for long-term crypto holders, we use it to our advantage with my options trading service, The Opportunistic Trader.

In fact, last week we closed out a crypto trade that pocketed us an 87% gain in just four trading days.

We achieved this return by trading options on the ProShares Bitcoin Strategy ETF (BITO) – an exchange-traded fund that holds bitcoin futures.

Today I’m going to show you how that trade played out. 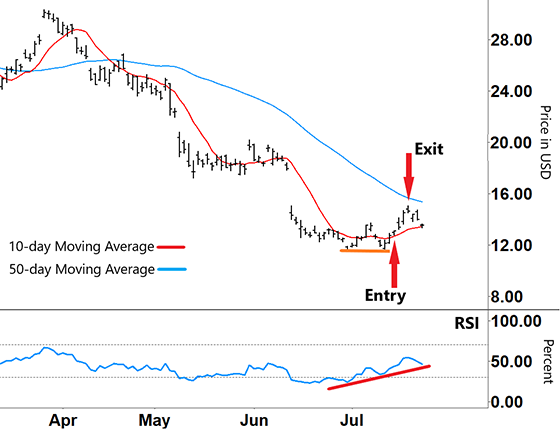 Initially, BITO traded against the major downtrend in March. But it resumed its downtrend in April when the 10-day MA (red line) crossed back down below the 50-day MA.

Then, the RSI tracked lower and the 10-day MA accelerated further below the 50-day MA. This led BITO’s downtrend to continue into June and early July.

However, there were two signals that showed me BITO was oversold and ready for a bounce…

So, as the RSI continued to track higher we entered a long position on BITO by buying a call option on July 15. Typically, call options increase in value when a stock price (in this case bitcoin) rises.

Once buying momentum started to wane (and after already securing a tidy profit), we sold to close our call option on July 20 for an 87% gain.

I want to reiterate that we made this return using options. If we had bought the BITO shares instead, then our returns would have been more modest.

Once again, this trade highlighted how important it is to be nimble in today’s market. Especially when you’re trading something as volatile as cryptos.

Since closing out our trade, BITO’s price has again started to slide. If we had held on for just a few more days, then we would’ve lost most of our profit.

But even if BITO did continue to rally, I still would’ve been happy with the near 90% return we made in such a short time.

When it comes to cryptos, we have a track record of sixteen winners in a row. In December 2021, we made a similar profit when we traded BITO in the other direction.

This trade proved what’s possible when you stick to clearly defined entry setups… and when you bank profits as soon as you see them.