Earlier this month, we took a close look at the Teucrium Wheat Fund (WEAT).

Initially, WEAT spiked due to the Ukrainian invasion. However, in March WEAT reversed lower before settling into a rangebound pattern through April.

After peaking again in May, WEAT rolled over and broke into a strong downward pattern.

When we checked out WEAT on July 11, it was trading back below the level it was when the hostilities began.

But at the time, there were signals showing WEAT’s selloff could be overdone.

Today, I’m going to update you on WEAT’s price action since then. And we’ll look for trading opportunities ahead.

Let’s take a look at WEAT’s chart below… 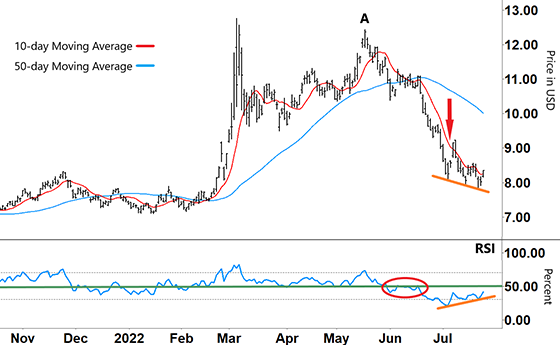 You can see how WEAT peaked in May (A) before reversing and heading lower.

After the initial fall, the RSI then traded along resistance (green line) as shown by the red circle. This saw WEAT trade sideways at around $11 before falling sharply lower.

You can gauge the strength of that down move by the steep angle at which the 10-day moving average (MA – red line) accelerates below the 50-day MA (blue line).

On July 11, I wrote that if the RSI continued to track around this oversold territory, then we could see WEAT trade below the $8 level.

However, right now I’m closely watching the action between WEAT’s stock price and the RSI.

When these two lines diverge, a change of direction is often in the cards.

In WEAT’s case, if buying momentum continues to track higher, then the stock price will inevitably push higher too.

In the short term, we can expect WEAT to trade back between $8.50-$9.00 if the RSI continues tracking higher toward resistance.

But what happens around the RSI’s resistance will be key.

If the RSI breaks up through resistance and gains traction in the upper half of its range, then WEAT could propel much higher. And this would provide the setup for a potential long trade.

Then, any long-term up move would depend on the 10-day MA breaking back above the 50-day MA.

However, if the RSI fails to break through resistance and instead reverses lower, then any short-term rally will quickly run out of steam. That would then set up WEAT to retest its recent June low.

If that’s the case, then WEAT would likely return to lower volatility given its long-term historical pattern. Meaning, it’ll once again trade within a much tighter range.

We’ll see how this change of direction plays out for WEAT in the coming weeks.

In today’s mailbag, a reader thanks Larry for his trading knowledge…

Thanks! I really enjoyed the July 21 column. Larry is like a wise tribal elder who has seen it all over the years. His wisdom of a repeatable process and solid basics is much appreciated. There are so many ranting talking heads on the financial news that I never watch. What a pleasant contrast!