However, not only are these companies developing new ways to extract those metals and minerals with less environmental impact, there’s another simple truth…

Whether it’s aluminium, copper, steel, palladium, or platinum, they all remain essential components in tech goods like smartphones and electric vehicle (EV) batteries.

So for many of these metals, demand is likely to grow over the coming decades.

Instead of trying to monitor and trade each of these metals directly, one exchange-traded fund (ETF) that represents this sector collectively is the SPDR S&P Metals and Mining ETF (XME). Given its near-equal weighting to industries within the sector, it’s less vulnerable to a pullback in any specific metal.

After bouncing off its lows in March 2020, XME tripled in price before peaking out in May 2021. As you can see in the chart below, XME tried to break higher at ‘A’ but couldn’t break through resistance… 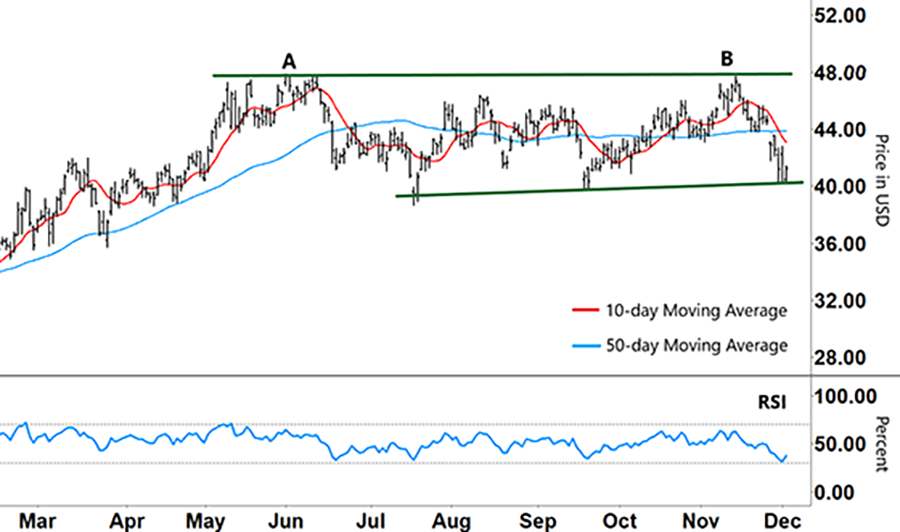 From there, XME transitioned from an uptrend to a sideways, rangebound market.

You can see this change in the long-term trend by looking at the 50-day moving average (MA – blue line).

Since around early July, the 50-day MA has remained flat. The short-term 10-day MA (red line) has also criss-crossed the 50-day MA multiple times without any clear (and lasting) change in direction.

Creating the outer parameters of the current trading range are our support and resistance levels (green lines). When XME rallied off its support mid-September, it ran all the way to the resistance line (B) before rolling over.

However, right now my focus is on XME’s most recent action. As you can see on the chart below, XME is trading right on support…

The Relative Strength Index (RSI) has also just bounced off an oversold level (30%), forming a ‘V’. When the RSI created a similar pattern at or near the lower grey horizontal (oversold) line in June, July, and again in September, it coincided with XME rallying.

If this pattern were to repeat with the current price action, that could provide an opportunity to go long. For now, we’ll wait and see.

If a long trade were to pan out, one thing to consider is the chart pattern. You can see that throughout the current six-month long sideways move, much of the price action has hovered around the 50-day MA.

Even when XME rallied right from support through resistance from September to November, XME retraced back to the blue line for several weeks during the move and stayed there. It’s like the 50-day MA is a magnet.

That means that if XME bounces off support, a trade from the bottom to the top of the trading channel might take several months to play out… if it gets there at all. Given that lower probability, a good exit point might be right around the middle of the channel on the blue line.

However, first we’ll need to see how the current action unfolds…

The next, and most important, test for XME right now is holding support. A break below that support level – along with the 10-day MA moving further below the 50-day MA – could instead mean a new downtrend is emerging.

Do you think XME will bounce off support, or will it hold?