With just a few weeks left in the trading year, soon we’ll be reading all about how the various asset classes have performed.

Data on residential and commercial property – as well as precious metals, stocks, and bonds – will reveal how well each sector performed.

But while investors will have their attention on major indices like the Nasdaq and S&P 500, I’ll be keeping my eyes fixed on another type of index… the CBOE S&P 500 Volatility Index (VIX).

Right now, the action in the VIX is capturing my attention…

There are two major reasons I watch the VIX.

First, it acts as a gauge on what traders are expecting the market (S&P 500) to do over the next month. That’s because it uses forward looking data (option prices), not historical data (like price charts and company reports).

And because it’s forward looking, it can often warn traders of an impending change in direction, typically a fall.

We’ve looked at the correlation between the VIX and the S&P 500 several times over the past few months (here, here, and here) about how a spike in the VIX often coincides with a fall in the S&P 500.

Today, I want to focus solely on how the current VIX pattern is playing out in the context of its action over the last two years. To do so, we’ll be taking a look at a bar chart of the VIX. While a line chart only shows closing prices, I use bar charts because they show all the price action…

A bar chart represents where the index opened (hash on left side), closed (hash on right side), as well as the high and low for the period. 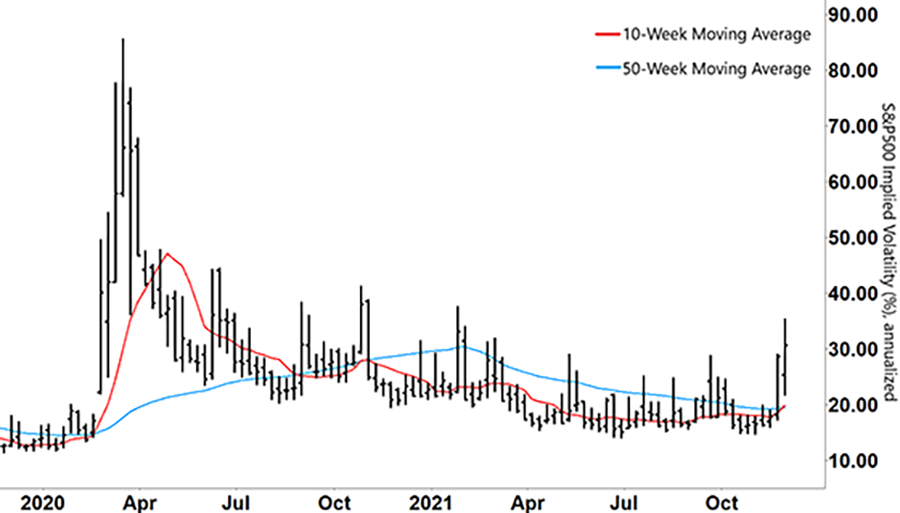 The other noticeable feature of this spike is the timing…

Once the VIX broke higher – with the 10-week moving average (MA – red line) crossing above the 50-week MA (blue line) – the VIX rallied for four weeks before hitting its peak.

From there, it dropped heavily for the next two weeks, before continuing its fall more moderately through April into May.

The major part of the spike was spread out over six weeks. Since then, those spikes have been far shorter in duration.

However, what’s even more compelling is the pattern that emerged within each of these subsequent spikes…

A closer look at the chart shows you that in all of these spikes, the bar in the second week closed lower (and/or had a lower high) than the first week of the spike…

That simply reflects traders becoming less fearful about future falls. (Remember that it’s the traders buying put options to protect themselves from a market fall that typically drives the VIX higher).

However, if you look at the current spike in the VIX, you’ll notice a different pattern…

For the first time since March 2020, the second week of a VIX spike ended with a higher close (and higher high) than the first week’s action. You’ll also notice that it’s the first time the 10-day weekly MA has crossed above the 50-week MA since February 2020.

If the current spike in the VIX fizzles and drops back to the 50-week MA, that means there’s less chance of a fall over the coming weeks. However, if the VIX continues to trend higher into a third week, then that makes the odds of a fall running into the year-end much more likely.

After such a long bull run, it’s easy for investors to become complacent. However, the VIX is telling me that investors need to be even more vigilant than normal right now.

What do you think will happen with the VIX in 2022?