About two weeks ago, we looked at a sector that’s vulnerable to rising interest rates – retail sales.

After rallying strongly into November 2021, SPDR S&P Retail ETF (XRT) peaked at ‘A’ on the chart below, before falling a massive 30% into this year.

With inflation out of control, and a series of rate rises firmly on the cards for this year, XRT sold off in anticipation of slowing personal consumption.

When we first checked out XRT (red arrow), it had broken a key support level (1)…

And, with the Relative Strength Index (RSI) stuck in the lower half of its band (below the green line), it was struggling to find any momentum.

However, not only did XRT find support (2), it also rallied. So, it’s the strength of that rally we’re going to look at today. 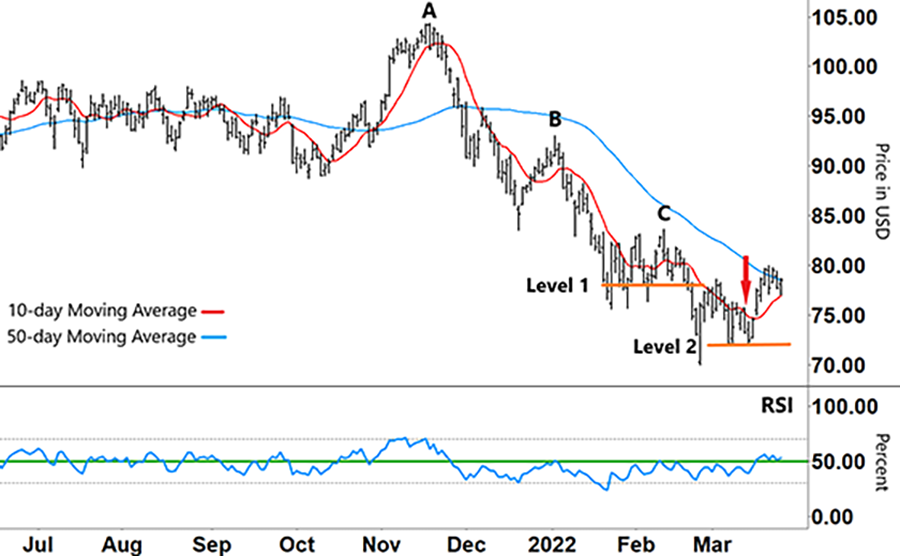 The long-term trend is shown by the 50-day moving average (MA – blue line).

After initially falling gradually after the short-term 10-day MA (red line) crossed below it, that long-term downtrend fell sharply into this year.

However, after XRT found support at level 2 (and subsequently rallied), those two MAs could soon cross the other way…

The 10-day MA breaking above the 50-day MA would show the emergence of a potential new rally.

But beyond the two MAs, one thing I’m watching closely is the daily price action…

I mentioned on Friday how the rate rise is taking some uncertainty out of the market. Combined with encouraging words by the Fed about the economy, it was enough for the whole market to rally.

But since then, I’ve been looking at the price action.

If that happens, the first target is XRT’s most recent high at ‘C’. XRT would need to break strongly above ‘C’ with increasing momentum for ‘B’ to come into play.

But that’s all based on the RSI.

The RSI has been showing declining momentum since XRT peaked at ‘A’ and inversed from being overbought.

After falling below support (green line), the RSI has remained in the lower half of its band. That’s why any rally in XRT has struggled to gain traction.

When XRT peaked at lower highs at ‘B’ and ‘C’, they both coincided with the RSI trying (but failing) to break above resistance.

But recently, the RSI has broken back through resistance. For the rally to take hold, the RSI will need to stay in the upper half of its band.

If it doesn’t (and the RSI falls back below support), XRT will make another lower high (becoming ‘D’)… and then continue heading lower.

Which way would do you think XRT will go?