I’ve been a trader for over three decades.

From my time around the markets, I’ve seen one commodity that gets traders more emotional than any other… gold.

For some, once they fall under the spell of gold, it’s like they can’t talk about anything else.

That’s likely because when gold gets going, it can really run.

If you held gold during either of those time frames, it paid off handsomely.

But six years – and even two years – can be an eternity for traders. We like making money on a shorter time frame. Sometimes it takes months to close a winning trade, sometimes it can be as little as a few hours.

The good news is that I’ve developed a way to profit from gold that works during the smaller moves – even when gold isn’t trending.

If you recall, last week we looked at mean reversion – a strategy I use often to spot profitable trades.

Check out the chart below. It’s a daily chart of the SPDR Gold Shares ETF (GLD), which is a good representative of gold’s price action. 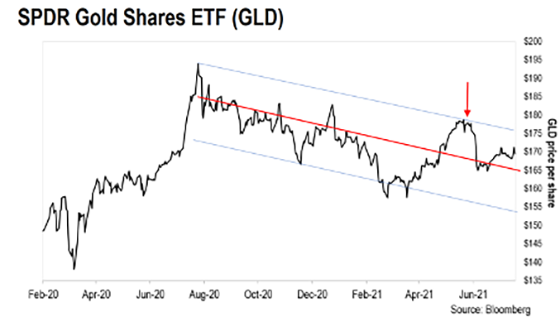 Since topping out in August last year, GLD has trended lower. That trend is shown by the red line on the chart.

The two blue lines represent two standard deviations of data. Meaning, 95% of the price action has occurred between these blue lines.

You can see how the share price fluctuates around the red line, but mostly stays within the two blue lines.

The point is that no matter their size or direction, each of these moves gives you the opportunity for a trade. You can trade gold both long and short.

We don’t have to predict the exact top and bottom of the move – we just need to collect a piece of that move to profit from it.

The good thing is that right now, GLD is again pushing higher towards the upper blue line. You can see that on the chart.

That may give us the opportunity for a trade soon.

By picking up lots of these trades – most lasting less than a few days – rather than trying to swing for a big win, you can keep banking regular profits, over and over. And that’s a key lesson for any trader to grow their account.

We’re happy to hear from some more satisfied readers…

Thank you for adding me to the emailing list for Trading With Larry Benedict.

As a subscriber to Jeff Clark’s Delta Report, I get similar information from other sources. Still, I am enjoying Larry’s daily notes and look forward to reading them. Perhaps one of these days, I’ll get a subscription to Larry’s work as well.

So, thanks for making me a more knowledgeable trader.

Thank you for this newsletter. I’m glad I’m receiving it. I wanted to learn more about your trading method as I think it is practical, doable, and isn’t a “new idea.”

I am responding to your article titled “The Biggest Mistake for Rookie Traders.” I am a new trader, with very limited knowledge, but try to be a sponge. And I think the same way you explained trades.

I started to keep a fairly accurate record of my daily P/L through a spreadsheet. I am still going through many growing pains with my trades, as I have a small amount in my account.

But the amount, I try not to focus on percent. I really try and focus on the percent gained or lost. If I were able to book even 1% a day, with about 250 trading days a year, that would be a 250% return compacted yearly, which would be great… If only trading were so easy, right?

So, no matter the amount next to the dollar sign, I try to utilize percentage when I am entering and exiting my trades. One time I broke away from my strategy, because it was a very bad day, and I had to pay for moving with my emotions (that day it was fear) and regretted it immediately.

So my goal as a small trader is to enter and exit trades with a 3-4% gain, or larger and just keep repeating this.

I am a new trader. I have not stopped reading for a year straight and I have to say that this is some of the best information I’ve laid my eyes on.

I loved your newsletter about the S&P 500 and the Bollinger bands and now this week about oil and XLE. Thank you so much for sharing your wisdom.

I greatly appreciate it and even though they don’t know it yet, so does my family because this can only be a benefit for them since I am going to teach them everything I know so that they can build wealth and live prosperously. Keep them coming! Thanks again.

When someone from Jeff Clark (lifetime member) or Stansberry Research (Alliance Partner) informed me I was eligible for Larry Benedict’s investing emails, I thought, “Oh, I really don’t need or want more financial research/analysis emails, especially if they’re trying to sell something.”

However, I thought, give him at least a week, if not a month, before ruling out what I don’t know yet. So far, I’ve been pleased with what’s been sent, including the recent essay on oil, although I like PXJ more than XLE. I liked Monday’s so much, I forwarded it to four colleagues and friends.