The first thing I do every day is look at the S&P 500. It helps me to get an idea of the overall market. I can then drill down to the sectors and individual stocks to see how each sector is acting compared to another.

Since April last year, the S&P 500 has nearly doubled.

For an index that contains multiple trillion-dollar stocks like Apple (AAPL), Amazon (AMZN), and Microsoft (MSFT), that is one heck of a move.

But while the traffic has been pretty much one way — in this case, up — there have been many smaller counter-moves (or counter-trends) along the way. 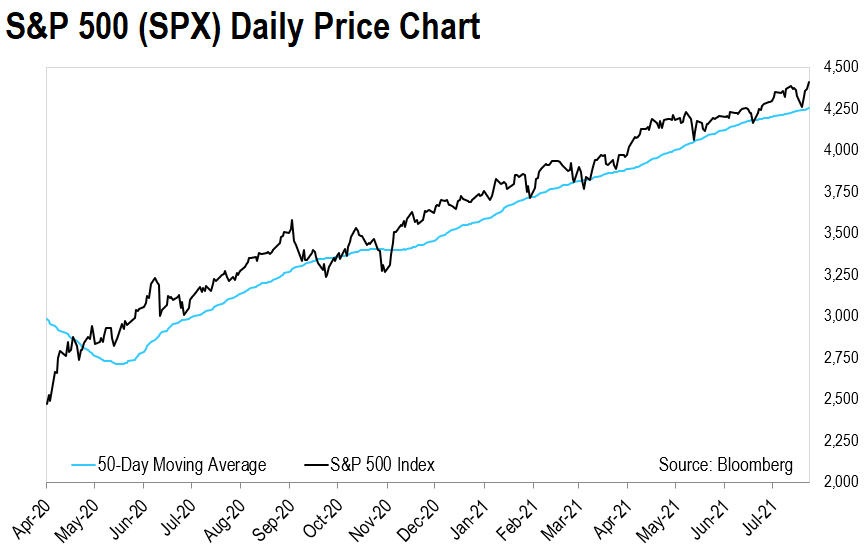 You can see the S&P 500 moved lower in September and October last year. And again, in February, March, and May this year.

In fact, the closer you look, the more counter-moves you will see.

That all adds up to something quite clear…

Markets don’t move in straight lines. Not for a day, or even for a week. And certainly not for over a year.

It’s these counter-moves – that go against the bullish trend – that I search out for my trading opportunities. The technical term for this is mean reversion. Put simply, when stock prices move away from their average, I take note of it. And then I trade it.

Let’s take another look at the S&P 500. This time, though, using a shorter timeframe.

The chart below shows the S&P 500 from August through December of last year. 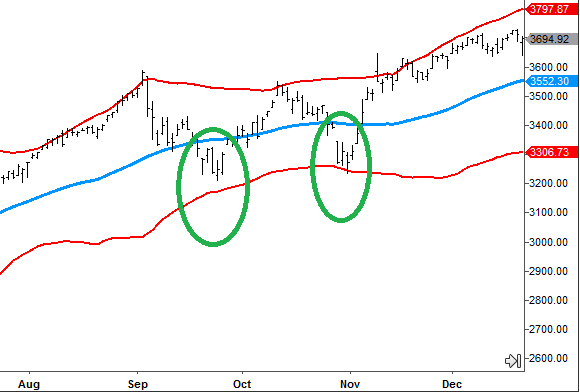 There’s quite a lot going on in this chart, but I’ll explain what it all means.

This time I added Bollinger Bands (BB). Those are the two red lines you can see on the chart.

Bollinger Bands show how far prices have traded from the average (blue line). The way Bollinger Bands are calculated, 95% of that price range lies within these two red lines.

Because the blue line is an average, the idea is that the stock price (or index level) will eventually revert to the mean (average).

On their own, Bollinger Bands are not enough.

As you can see through August, the price reached the upper red line, indicating the index was overbought. Yet the blue line (average) continued to move on up.

That’s why what I do next is crucial.

First, I use the long-term MA to determine the overall trend. This part is key.

Next, I use Bollinger Bands to determine where to enter the trade.

It’s important to put the two together.

If the long-term trend is up, I use the bottom red line as a place to buy. If I get it right and the price reverts to the mean (moves higher), I can then look to sell out for a profit.

For example, the two green circles represent two notable counter-trends in the S&P 500. The index moved much lower than it previously had – coming all the way down (or near) to its lower Bollinger Band. That would’ve been a good place to buy. As you can see, the price continued to move higher both times it fell to the lower BB.

Similarly, if the long-term trend is down, I use the upper red line as a place to go short. In this case, if the price reverts to the mean (moves lower), I will look to buy it back for a profit.

By using Bollinger Bands in conjunction with a long-term average, you can help put the odds in your favor.

And in doing so, you can take advantage of the many counter-moves in the markets.