This week, we’ve been focusing on mean reversion, a vital part of my trading success.

The strategy works in any kind of market… even one that’s not trending at all.

Today I want to take it a step further, and break down a recent winning trade of mine…

I’m going to show you how we used mean reversion to profit in my trading service  – The Opportunistic Trader. We were able to make over 100% in one week on our Goldman Sachs (GS) put options.

Let’s start with a daily price chart of Goldman Sachs… 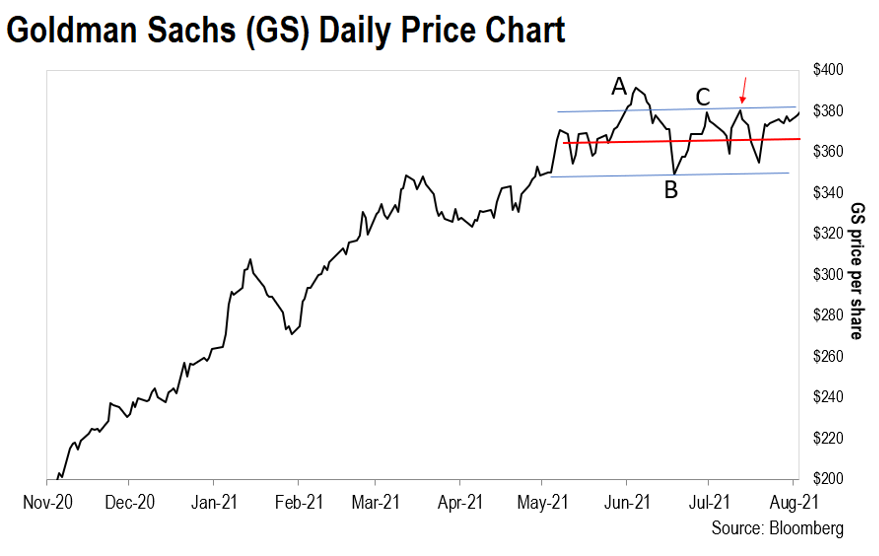 As the chart shows, GS rallied strongly from last November up until this June.

After trying to rally again, the stock lost momentum. This time, it peaked around $381 a share (‘C’) on July 1.

This type of price action really caught my attention.

I knew straight away that a trade could be in the cards.

When a stock rallies strongly, you can expect to see some pullbacks.

After all, stocks don’t move higher in a straight line.

As the chart shows, GS had several pullbacks in its rally from November to June.

However, the stock continued to make higher highs. Right up until June, that is.

If a stock fails to trade higher than its previous high after a pullback, it can mean the uptrend is over. And that’s exactly what happened to GS coming into July.

GS failed to make a higher high, peaking at a lower price instead.

To recap, the red line is the trend line. And 95% of the price action takes place in between the blue lines.

When GS tried a second time to break through the upper blue line and failed, I knew it was time to go short. So, we entered this trade on July 13 (the red arrow).

For this trade, I bought a put option – something that should benefit if the stock price falls. When a trader goes short, they typically buy put options.

That’s because I expected GS to move lower. And as you can see, it sharply fell just a few days after I bought the puts.

To find out how we exited the trade for a 100% gain, tune in to tomorrow’s essay…