Yesterday, we looked at gold, a commodity that can really bring out the emotion in traders…

Today, we’re going to look at a commodity that’s often paired with gold.

In fact, I wrote about its correlation with gold last Wednesday.

That commodity is silver.

And similar to gold, investors view silver as a store of value. So, sometimes it’s bought as a hedge against inflation.

But what I like most about silver is that, like gold, it offers plenty of trading opportunities.

Check out the chart below and you’ll see what I mean.

It’s a daily chart of the iShares Silver Trust (SLV) – an ETF that acts as a proxy for the spot price of silver. 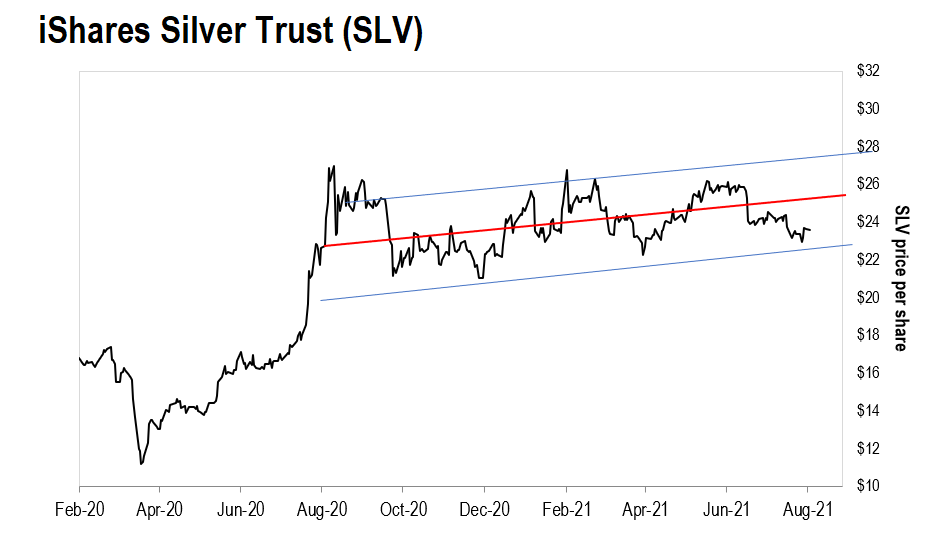 There are two major trends here.

Let’s start with the more enticing one…

After bottoming out in March last year, SLV rallied hard until August. It only took around five months for SLV to double.

But the second part of the chart shows something very different…

Since topping out in August last year, SLV has fizzled. For about a year, it has traded in a tight $6 range (shown by the blue lines).

From my experience, most new traders are only interested in that first part of the chart.

After all, who doesn’t want to take part in a bull run like that?

For me, though, I like the second part of the trade too. In fact, this kind of sideways market can be perfect to trade.

Let’s take a look at the SLV chart using one of my favorite strategies, mean reversion…

The red line in the chart represents the overall trend. And from the previous essay on mean reversion, we know that 95% of the price action has occurred between the two blue lines.

Each time SLV trades close to either of the blue lines and reverses back towards the red line, that gives us another opportunity to trade.

Right now, a long trade (betting it’ll go up) looks to be on the cards, since SLV is down below the red line.

So, if you bought SLV and it reverts to the mean (moves up to the red line), you could pick up a nice, quick profit.

Don’t forget, you don’t need to time the move perfectly to profit – you just need a piece of it. Remember, we like to put a “profit on the page” whenever we can.

I know that for some, this style of trading is the exact opposite of what they learn when starting out. They avoid range-bound markets, and instead focus solely on hunting out the next big move.

In doing so, however, they’re giving up countless trading opportunities.

And that means they’re letting lots of potential profits fall off the table… and they can be quite big profits too.

In fact, tomorrow, I’ll show you how I recently used this exact strategy to book a 100%-plus profit in a week.