One of our service providers is currently experiencing issues which affect member site access and order processing. We apologize for any inconvenience.

During my 35 years in the markets, I’ve learned plenty of lessons along the way.

Some of the toughest (but best) lessons I learned as a trader came from losing money.

One of the biggest challenges I had was learning how to stop myself from trading – instead of trying to jump on every move.

I spoke about this last month when I explained the importance of being patient and knowing when to sit out.

In that essay, we looked at the Financial Select Sector SPDR ETF (XLF), which looked like it was ready for a breakout.

So today, I’m going to follow up on XLF to see how it turned out…

Did sitting out mean we missed out on making a profitable trade?

First, let’s take a look at the chart… 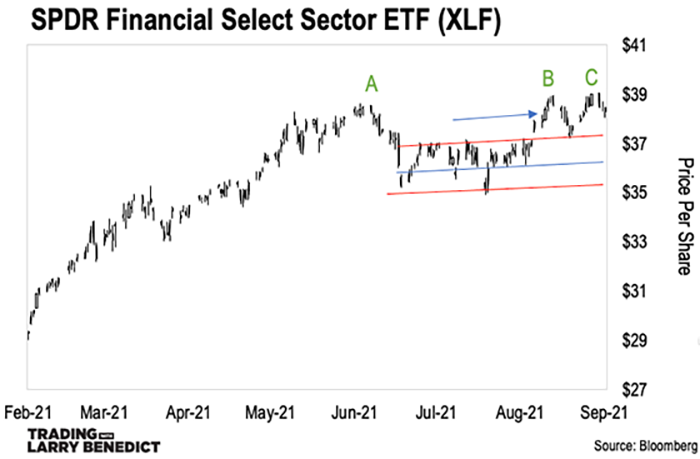 From there, it pulled back before trading sideways in a range (between the two red horizontal lines).

At the time, XLF had just broken through the upper red line (blue arrow).

As I’ve mentioned before, when you see a breakout like that, it can be tempting just to jump straight in.

I know I would’ve when I first started out…

But that’s why I remained cautious – it was just too early to tell.

So, let’s see how things panned out…

As you can see, that breakout turned out to be a false move. It peaked just a few days after I talked about it (“B”) before rolling over and falling lower.

If we’d jumped straight in, we would have lost money.

Then, the same thing happened again this past week… XLF again rallied to another peak (“C”) with yet another move that could lure you in.

However, it failed to continue. And, we would have lost money by jumping into a trade.

It doesn’t take long for a series of smaller losses like this to burn a much bigger hole in your trading account.

That’s why patience is key.

And with XLF – I continue to urge caution.

To be clear, that’s not to say that XLF won’t trend higher from here… Don’t forget, when XLF rallied last November, it turned into a trend that lasted eight months.

But we need to see more evidence of a promising price pattern before committing ourselves to a trade.

By being cautious, there’s always the chance that you could miss out on a profitable trade. And truth is, it can really be frustrating.

However, from my experience, only going for high probability trades is the best way to make it as a profitable trader.

P.S. Next Wednesday, September 8 at 8 p.m. ET, I’ll be revealing a short, but profitable, window in the markets… It’s a rare phenomenon that happens only four times a year… I call it the “7-day blitz,” and it’s guaranteed to happen soon…

My event’s not until next Wednesday, but you can sign up now to become a VIP for free. As part of the VIP treatment, you’ll be given text reminders of the event along with a special report detailing my #1 stock pick for the rest of 2021.

All it takes is just one ticker, in one week, to potentially make life-changing gains. To prepare yourself, make sure you’re signed up to watch my special presentation right here.