For a commodity that briefly traded at a negative price two years ago, oil sure has made an impressive comeback…

Back in April 2020, oil traded below negative $30 a barrel. But just a couple weeks ago, WTI crude futures traded at nearly $125 a barrel – its highest level in more than a decade.

It’s widely believed the war in Ukraine is responsible for the spike in oil. Yet, oil started rallying long before that…

From March 2020 through its recent high, the Energy Select Sector SPDR Fund (XLE) quadrupled in price.

After pulling back from its recent high, today I want to see what’s next for oil…

Even if the situation in Ukraine settles down, there’ll still be plenty of volatility (and trading opportunities) ahead.

So, let’s take a look at the chart of XLE… 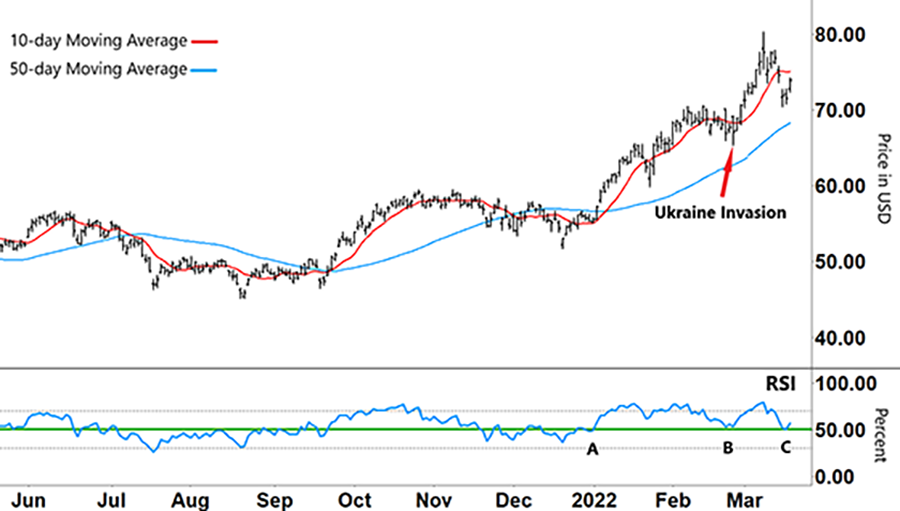 After retracing against the major trend from June into the start of September, the 10-day MA (red line) broke back above the 50-day MA in mid-September in a bullish signal.

Then, after a period of consolidation – where the two MAs tracked each other closely through November into December – the 10-day MA burst higher at the start of 2022, establishing the next leg of the uptrend…

However, with the Relative Strength Index (RSI) a long way into overbought territory (above the upper grey line) and forming an inverse ‘V’, that buying momentum reversed. XLE then moved lower.

In the span of a week, XLE’s share price fell over 10%… bringing it back to a key level…

The RSI is again right back on its support level (50% – green line).

When the RSI broke back above resistance in late December (A) and rallied up to the top of its band, XLE also rallied strongly.

Then, when the RSI re-tested support late last month (and held), forming a ‘V’ (B), XLE rallied right up to its high.

Now the RSI is again testing that support level (‘C’). This level is key to XLE’s next move…

If the RSI holds support and rallies to the top of its band (upper grey line), then we can expect XLE to rally too. The next test for XLE would be to take out its March 8 high at $80.22.

Even if the RSI doesn’t rally all the way to the top of its band, but still stays within the upper half (above the green line), we can still expect XLE to rally. It’ll just be less sharp and strong.

However, if the RSI fails to hold support at ‘C’, and instead falls into the lower half of its range (below green line) and stays there, then that could see another leg down…

After falling over 10% off its high, a move like that on the RSI could soon see XLE fall by a similar amount again.

That’s why the price action this week all hinges on the RSI. It could soon provide the opportunity to trade XLE in either direction.

But even beyond that – while the Ukraine invasion might be driving the current news cycle and short-term oil price – this two-year rally tells us that there are way more factors in play.

Hi Mr. Benedict, I’ve been following you for the past 15 years. I saw you a couple of times on CNBC. Always so incredibly brilliant on the markets.

I’ve watched all your specials and they are always insightful. So, I watch, listen, and learn. Hoping your trades are always successful.