I closely watch the consumer discretionary sector due to its huge impact on the economy.

After multi-decade high inflation and increasing interest rates, this sector has endured a rough year so far.

Since the start of 2022, the Consumer Discretionary Select Sector ETF (XLY) has lost over one-third of its value by a prolonged fall.

However, recently XLY has been showing signs that its downtrend is losing momentum.

So, it could be due for a bounce.

Today, I’m going to see what’s in store for this vital sector and hunt out some potential trades. 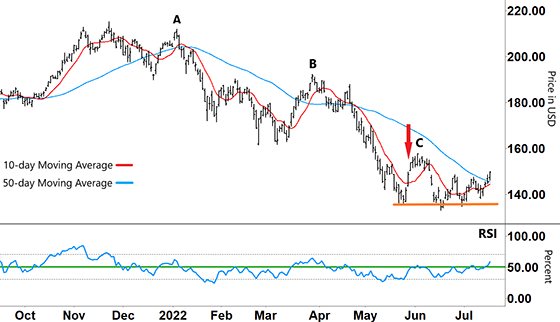 Then, in early January, the 10-day MA (red line) confirmed the downtrend by crossing down below the 50-day MA.

Apart from a brief period in March and April, the 10-day MA has bearishly remained below the 50-day MA.

The other tell-tale sign of a bearish pattern is XLY’s series of lower highs at ‘A,’ ‘B,’ and ‘C.’

When we last looked at XLY on May 31 (red arrow), it was in the middle of rallying off its May low.

However, the Relative Strength Index (RSI) ran into resistance (green line) and failed to break higher. Eventually, the RSI rolled over and caused XLY to fall.

Since then, two positive signs have emerged from our technical indicators:

If the RSI remains in the upper half of its range – and the 10-day MA crosses back above the 50-day MA – then that could mean this up move is gaining traction and could provide an opportunity to go long.

The next test would be for XLY to take out its recent high at ‘C,’ which is around $158.

However, we need to keep a close watch on our indicators.

Despite initial promising signs, previously the RSI reversed and fell back through support at ‘B.’ And this caused XLY to fall.

For this up move to take hold, it’s crucial for the RSI to remain in the upper half of its band.

If the RSI instead inverts and creates a lower higher than ‘C,’ then the current long-term downtrend will remain intact. And this would lead XLY to soon retest support.

After such a sustained fall, XLY is seeking a reason to rally.

But as always, we need to stick with our proven indicators to give any potential trade the best chance of success.