When the huge rout in growth stocks set off a broader market sell down this year, one sector that held up well was industrial stocks.

By mid-March – when former highflyers like Netflix had fallen by around 35% for the year – the Industrial Select Sector SPDR ETF (XLI) was trading a few dollars below its January high.

However, after topping out in March XLI’s downtrend gathered momentum as it made a series of lower highs.

Then, XLI tried to rally again into early June and reversed sharply taking it down to its yearly lows.

Since then, XLI was able to form a short-term base from which it has recently burst higher.

Today, I’m going to discuss how this current move might play out, plus look at some potential trades. 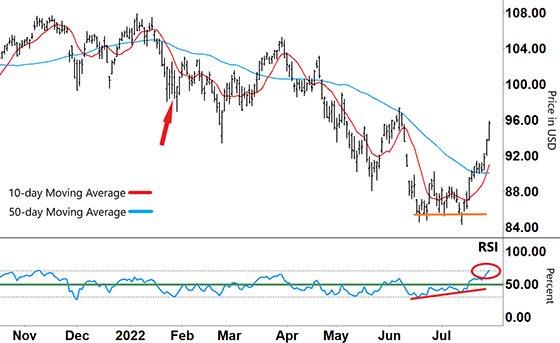 XLI initially fell early in the year when the 10-day moving average (MA – red line) broke down below the 50-day MA (blue line).

After briefly crossing back the other way when XLI made its lower high in mid-March, the 10-day MA broke down below the 50-day MA again in April and began to accelerate lower.

This saw the angle of XLI’s downtrend steepen, as shown by the 50-day MA. It also caused XLI to take out a previous support level that I wrote about in late January (red arrow).

Then, as buying momentum steadily increased (red line on the lower half of the chart), XLI was able to start forming short-term support (orange line) through June.

With that support holding into July, there were two technical signals that showed XLI setting itself for its current move higher…

So, after these two positive signs what am I expecting next?

For the up move to gain further traction, we’ll need to see the 10-day MA accelerate higher above the 50-day MA. The next test for XLI will be to take out its June high ($97.34).

I’m also looking to see if the RSI can stay in the upper half of its band.

However, with XLI rallying so strongly, the RSI is now tracking on top of the overbought line (upper grey dashed line), as shown by the red circle.

What happens around this level is key to XLI’s future direction… and the setup for any potential trades.

If the RSI continues to track around this level without reversing strongly, then that’ll give more impetus to XLI’s up move.

However, if the RSI forms an inverse ‘V’ and retraces sharply lower, then we can expect to see XLI’s current rally peak out.

We could then use that reversal as a potential entry setup for a short trade. The aim being to profit from a quick down move as the RSI tracks back toward the middle of its range.

Either way, after such a strong move XLI is showing plenty of promising signs.

In today’s mailbag, a reader thanks Larry for his recent trade recommendation…

This trade will take a big chunk off of my brokerage margin along with some profits I took today before the prices went up. Oh well. Thank you again for all of your work and another great trade!