Throughout 2022, I’ve been keeping a close watch on the Utilities Select SPDR Fund (XLU).

The utilities sector can be a handy hedge against inflation. That’s because utility companies can adjust their charges when inflation rises.

While the rest of the market fell this year, XLU rallied strongly. Back in April, XLU hit its all-time high.

After retracing around 10% from that high, XLU rallied again at the start of this month (red arrow on the chart).

At the time, XLU looked to be setting itself up to retest its April high.

But XLU instead reversed and caught up with the heavy selling that hit the broader market in June.

Today, I’m going to discuss what caused this sudden reversal and what to expect next.

Let’s pull up the XLU chart… 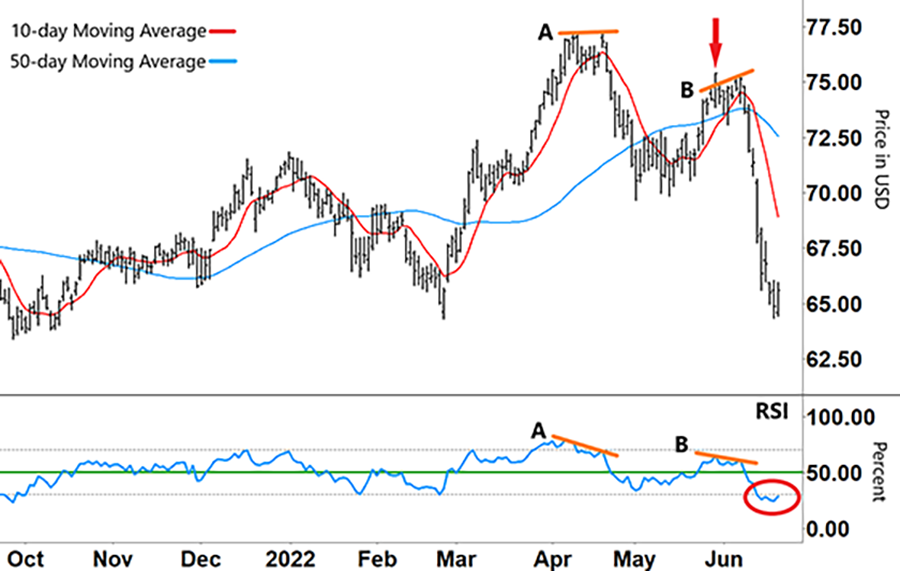 You can see XLU’s rally began in February and peaked in April.

That rally was confirmed when the 10-day moving average (MA – red line) broke strongly above the long-term 50-day MA.

However, that move ran out of momentum when XLU ran into resistance.

The two orange lines marked ‘A’ show the divergence between the stock price and the RSI. This divergence caused XLU to roll over and retrace lower.

And that pattern repeated at the orange lines marked ‘B’ with XLU’s most recent peak in late May.

While XLU made higher highs, the RSI made lower highs. And when momentum declines, eventually the stock price will also fall.

After the RSI broke down through support (green line) and fell sharply, XLU’s stock price followed it down. You can gauge the strength of that selloff by the action of our two MAs.

The 10-day MA crossed below the 50-day MA at almost a right angle. And currently, it’s still trending lower.

But the potential action around this current price level has really caught my attention.

Before I explain why, take another look at the chart…

Although it’s still early, XLU is now trying to establish a short-term base. This base is the same level from which XLU rallied in February.

Put simply, the decline in selling momentum has taken some of the downward pressure off XLU.

Now, if the RSI breaks out of oversold territory and heads back toward the green line (resistance), XLU will likely bounce.

When similar patterns emerged in January and late February, XLU rallied soon after.

After a sharp selloff and increasing buying momentum, a move back up to $67-$68 could be in the cards.

But remember, when volatility is high a move can reverse in a second.

So, even if we get the trade setup and entry right, we still need to be ready to take profits when we see them.

Is the utilities sector still part of your inflation hedge toolkit?