One of the most common (and cliched) beliefs of the market is that gold is a hedge against inflation. Investors hear it so often that they simply believe it’s true…

However, last year certainly flipped this idea on its head. If anything, 2021 proved this theory to be partially true at best.

While gold enjoyed somewhat of a rally from April through June as inflation became a big story, gold (and gold miners) spent most of the remainder of 2021 languishing.

In fact, as the November Consumer Price Index (CPI) print (released on December 10) showed inflation rising at its highest rate in almost 40 years (6.8%), the VanEck Gold Miners ETF (GDX) was only trading just above its yearly low.

You can see how this played out in the chart of GDX below. From mid-June, the long-term 50-day moving average (MA – blue line) continually fell before flatlining from October onwards. 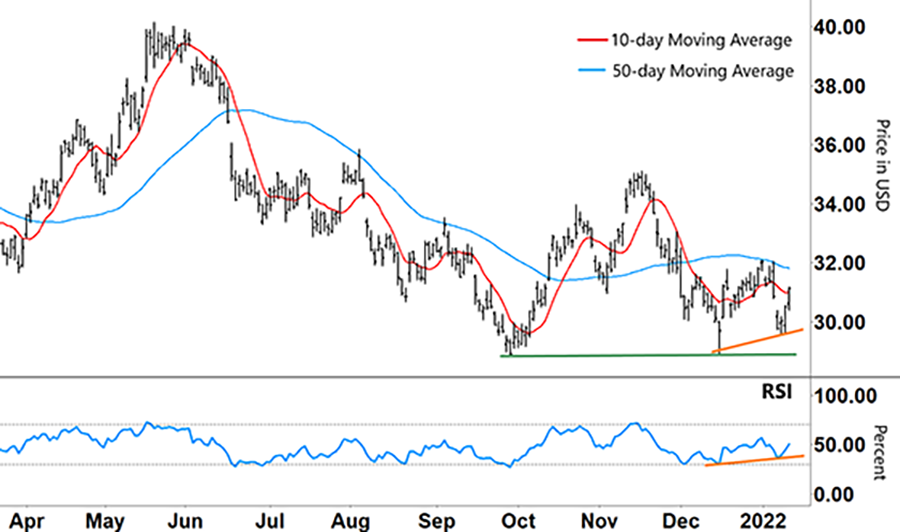 However, when it comes to trading gold (and gold miners), rather than focusing on big macro themes, I prefer to trade straight off the chart.

And, over the last month or so the chart is starting to look more promising…

In mid-December, GDX traded down to test the yearly low it made on September 29. As you can see on the chart, GDX found support and bounced off this level. That coincided with the Relative Strength Index (RSI) showing GDX to be oversold (on or below the lower grey horizontal line).

From there, GDX rallied back up and touched the 50-day MA on December 31 and on January 5 before falling lower.

However, I’m watching something else closely right now…

On the lower half of the chart, I drew an orange support line. You need to consider how this correlates to the other orange line I’ve put on the price chart.

When the RSI formed a ‘V’ on December 15 and again on Janaury 6, this coincided both times with GDX rallying higher. As you can see, both orange lines – meaning both the RSI and share price – are trending higher. In the most recent move, both made a higher low.

While it’s still very early in this move, the first test will come soon enough. What I’m watching for next is to see if the share price – and the short-term 10-day MA (red line) – can break above the 50-day MA.

If that were to happen, the first price target for GDX becomes its most recent high from November 16 at $35.08. That’s the price level that most recently coincided with GDX going into overbought territory on the RSI.

A short, sharp move like that would still offer enough opportunity to pick up a nice quick profit. A subsequent break above that would put the May high of $40.13 back on the radar.

For now, the most immediate challenge for GDX is staying above support (green line) and the 10-day MA crossing above the 50-day MA. That’s what I’ll be watching for over the coming week.

When it comes to gold and gold miners, traders often get so wound up in big macro themes (and what they invariably believe to be huge potential profits) that they miss out on all the small moves.

Having watched gold for many decades, I can tell you that those big moves only happen every so often. Most of the time those moves simply peter out.

Capturing all those small moves regularly throughout the year is a much better way to put profits in your trading account.

Do you trade gold? If so, what are some of the methods you use?