Larry’s Note: Last week, I introduced an analyst who’s been working with me behind the scenes…

Eric Shamilov is one of the few analysts whose opinions I trust. He began his career as a macro portfolio manager in 2012 and has been working with hedge funds and top-tier investors ever since.

So I’m pleased Eric has agreed to periodically contribute his analysis in these pages.

And today, he’ll share what we really learned at this week’s Fed meeting…

Which one of these three quotes from Fed Chair Jay Powell’s Wednesday’s Q&A is unlike the other two?

Because if Powell believes in 1 and 2, then he can’t possibly think 3.

So why is he saying he doesn’t know the odds?

Maybe it’s the November elections, or maybe he wants to avoid a financial panic.

Regardless, he’s withholding what he truly believes… which is that a soft landing is just not going to happen.

The Federal Reserve has been telling us that it’ll miraculously engineer a soft landing – a “manageable” economic slowdown.

But I consider Powell’s statements as a way of getting the market ready for a real recession. After cheerleading for a soft landing for months now… it appears they’re starting to accept that the Fed was wrong… again.

I emphasize “real” because – even though we’re in a technical recession (gross domestic product [GDP] falling two quarters in a row) – it hasn’t really been felt yet.

Unemployment has been low, and spending is still elevated. This is why corporate earnings have been solid.

So it kind of makes sense that many people have held out hope for a soft landing.

But all the rate hikes, tighter monetary conditions, and whittling down of wealth from stocks, crypto, and real estate are going be felt eventually.

The pain has a lag to it. It takes time to seep into the economy.

And that time is fast approaching…

Powell mentioned mortgage rates in his press conference this week, which I suspect played a big part in the market’s collapse. 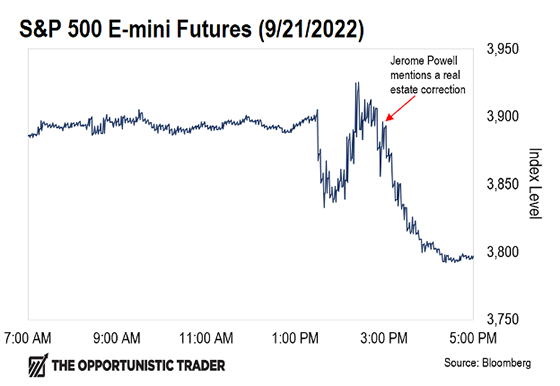 30-year mortgage rates have now topped 6.29%… levels not seen since the 2008 Financial Crisis.

On its own, higher rates don’t necessarily mean real estate is in trouble. During the 1970s, real estate prices more than doubled along with interest rates.

But this time is different.

I understand that they felt these moves were needed to cope with the self-imposed economic shutdown during the height of Covid in 2020… but 2021 was the year of the “Covid Asset Bubble.”

People were not only hyping up the stock market… They were also talking up real estate as well.

However, after the big run-up in real estate prices, it seems this market is extremely vulnerable now. That’s what the Fed is seeing – and hopefully preparing for.

But there are major issues aside from real estate…

Earnings May Have Peaked

At the end of the day, when you take out all the market narrative, financial pundits, and the hype…

The direction of the market is determined by earnings rising or falling.

So far, they’ve been holding up. Last earnings season (which kicked off on July 14 when the market was close to its lows) was a major win for stocks.

Earnings were beating analyst estimates despite the market anticipating that those analysts had been overestimating their numbers.

FedEx is a bellwether stock on the front lines of trade and commerce. And it showed that corporate earnings may have peaked.

The next earnings season is coming up in mid-October – the most seasonally weak time of the year.

If earnings show a slowdown, then that alone will enable another 10–15% drop in the market.

But we may be looking at something even more severe…

If tighter monetary conditions are finally starting to be felt in the economy, then we may be heading for a much bigger fall – one that could erase all of the financial gains of the Covid Asset Bubble.

That’s something Larry and I will be keeping a close eye on in the coming months.

In today’s mailbag, subscribers write in to thank Larry for their recent gains…

Thank you, Larry Benedict, for the QQQ recommendation. It was a success, and I’m very happy with all the things I’ve learned so far.

I just joined your service. My first recommendation was for a put option on SPX. So bottom line, I made a $3,000 profit in 24 hours! Thanks Larry! I left some money on the table before and after – but what a tremendous opportunity to profit on your experience and knowledge of the options market! Thanks again!

Thank you as always, for your thoughtful comments. We look forward to reading them every day. Keep them coming at [email protected].