Larry’s note: Today, I’d like to introduce an analyst who’s been working with me behind the scenes…

It takes a lot to convince me about the market, but Eric Shamilov’s opinions help shape mine. He’s a highly profitable trader, analyst, and writer.

He began his career as a macro portfolio manager in 2012 and has been working with hedge funds and top-tier investors ever since.

So I’m pleased to announce that Eric will begin periodically contributing his analysis to readers.

And today, he’ll share about how going against the grain can lead to big opportunities for traders…

The world of finance is indoctrinated to believe that markets are efficient… that prices always reflect reality.

It starts academically, in the economics classroom… then seeps into the professional world.

If you want to see it in action, just wait until the market runs up a good 15–20% and observe how, one after the other, the banks on Wall Street begin upping price targets.

This was the case in the middle of August, when the Nasdaq rose 22% from this year’s lows.

But a simple – yet infinitely important – question to ask is… where were these same analysts at the lows?

The problem is that no matter what most people say… they’re biased. And when it comes to finance, this bias corners investors to chase the highs and sell at the lows.

The mind is at ease when it goes with the flow. But this is a mental flaw… especially in trading.

And with the markets we’ve had this year, it can quickly lead us astray.

Because the biggest opportunities come from being contrarian.

The Irony of the Markets

The theory of efficient markets is a problem. It says asset prices reflect all available information in real time.

It tells you to trust prices… and that you should believe in momentum.

But there’s lots of irony in the market…

One of them is this: The actual creator of the efficient market hypothesis – Nobel Prize winner Eugene Fama himself – once said that momentum is the “biggest embarrassment to the theory” of efficient markets.

I wouldn’t say it’s a complete embarrassment, though. It just morphs into one.

When momentum in the stock market begins to form, it’s usually rooted in solid fundamentals and occurs as a result of new information coming in. But eventually, momentum transforms into a bloated, ugly version of itself.

When that happens, prices are no longer driven by new information… Instead, they start reflecting headlines.

Eventually, everyone settles on one big narrative they use to justify the price momentum.

Yet this turns into feedback loop. Momentum drives headlines… but at the end of a trend, headlines drive momentum.

This unholiest of alliances forces otherwise rational investors to second-guess what they’re seeing.

The only thing that ultimately breaks that feedback loop and gets prices more in line with fundamentals is an event that shakes up the market.

And we had one this week with the consumer price index Consumer Price Index (CPI) report, where the market realized, “We’ve been had yet again”…

No One Wants to Move Against the Grain

Neither I nor Larry Benedict himself have seen a three-month stretch where the markets and headlines were so in sync… yet so wrong.

The chart below shows why the market bounced from the lows in June to rise 22%… and then gave most of it back. 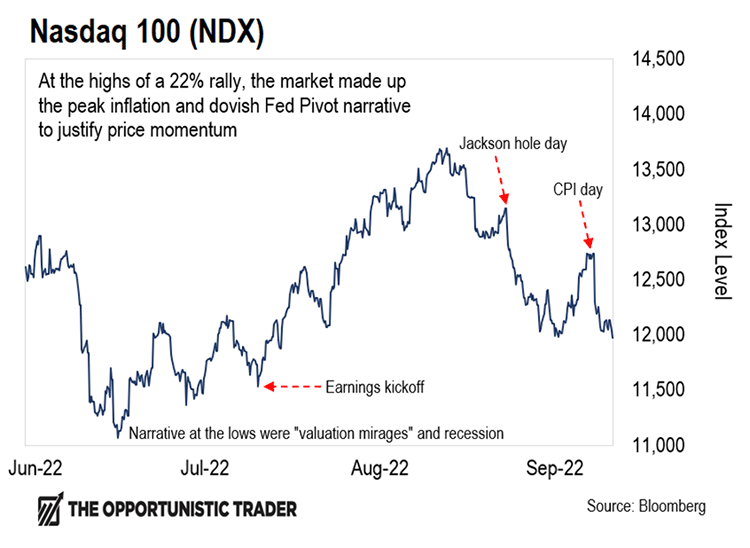 At the low point, this index was already down around 33% YTD…

Yet no one would buy. All you saw were headlines, pundits, and pros calling for even more downside.

But this was right before earnings were set to kick off, and the S&P 500 actually looked pretty reasonable from a valuations point of view.

It had come down to its long-run average at around a 16 price-to-earnings (P/E).

However, no one wanted to go against the grain and buy.

Then came July 14 – earnings season. One after the other, every company seemed to obliterate estimates.

When the market realized earnings were holding up amid the economic slowdown and Fed rate hikes… it rightfully rallied. That was a fundamentally sound move.

But then it got bloated… and the story changed.

At the highs of the rally, we had headlines like this from Barron’s – “Why the Stock Market Rally Could Be the Real Thing”…

The media was saying things like, “If inflation pressures continue to dissipate… then maybe the Fed can pivot. And the situation resolves itself bullishly.”

All you heard at the highs of August was that inflation had potentially peaked and the Fed would scale back the pace of hikes.

This was a classic example where narrative diverged from fundamentals…

But the reality could be seen in the chart below: 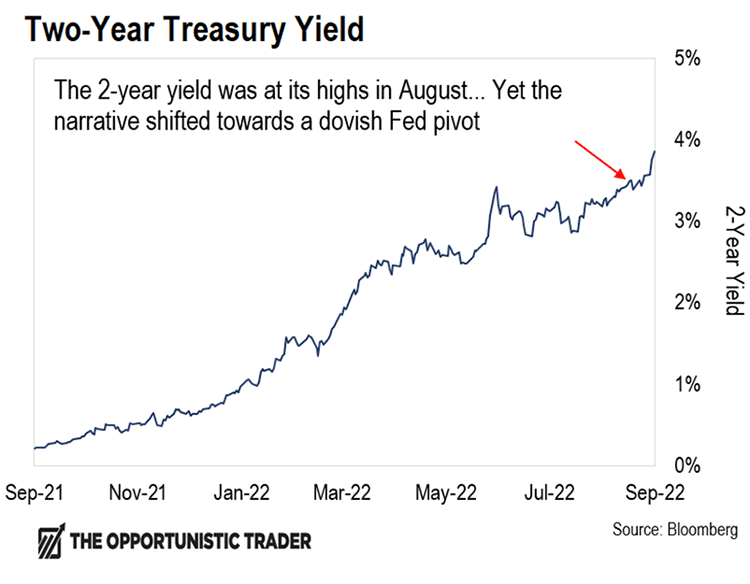 This shows the yield on two-year Treasurys. Keep in mind that the Treasury market is broken up by maturity.

And as you can see… there was never an indication that the Fed would back off. The 2-year yields were still at their highs despite the media narrative.

What made that rally even more puzzling, though, was the fact that the Fed members were coming out in droves and blatantly telling the market they were holding firm – that inflation is not even close to being defeated.

But the market simply couldn’t look past the price momentum…

After all was said and done… Powell’s Jackson Hole speech briefly crushed the market’s dream.

But even after a 12% decline from August’s highs, the market still hadn’t learned its lesson.

It rallied again last week in the hopes that the CPI would show that inflation has peaked. Of course, a 2–3% bounce off the lows we could understand… but 7%?

Then the justification turned to oil’s recent decline, as if oil is the only thing driving inflation.

Yet despite all the hype in the media… on Tuesday, inflation showed an 8.6% YoY increase in inflation (ex Food and Energy) when analysts were expecting 8.3%.

Most of the market got crushed in the aftermath.

But if we had the right mindset – and didn’t assume markets are efficient – then we had the perfect opportunity in this setup.

Larry and I were watching this distortion between reality and the market’s expectations with anticipation. We recommended buying the $3975 S&P 500 Index (SPX) puts first thing on Monday, before the CPI numbers were released…

We saw the narrative building… We saw the fundamentals diverging.

And we saw a big chance of a big letdown.

Officially, we recorded a 145% gain on Monday’s options trade against the market. We closed it the very next day.

And judging from all the feedback we’ve received, our subscribers did even better than us.

All trading and investment decisions really boil down to a decision of whether to follow momentum or go against the grain.

To know which one to go after, it might be a good idea to keep Mark Twain’s famous quote by your trading desk…

“Whenever you find yourself on the side of the majority, it is time to pause and reflect.”

P.S. We’d love to hear your feedback on today’s essay. Do you normally follow momentum or go against the grain?

To share your thoughts, write in at [email protected].