While stock investors were suffering big losses, those who owned gold mining stocks were enjoying some big gains.

In just five weeks, the VanEck Gold Miners ETF (GDX) rallied almost 40%! (You can see how strong that rally was in the GDX chart below.)

The inverse correlation between gold and stocks isn’t anything new.

That’s why stock investors hold gold as downside protection for when their share portfolio takes a hit.

But today, I’m going to discuss the GDX action from last week.

While shares were selling down again, so was GDX.

Let’s look at the GDX chart… 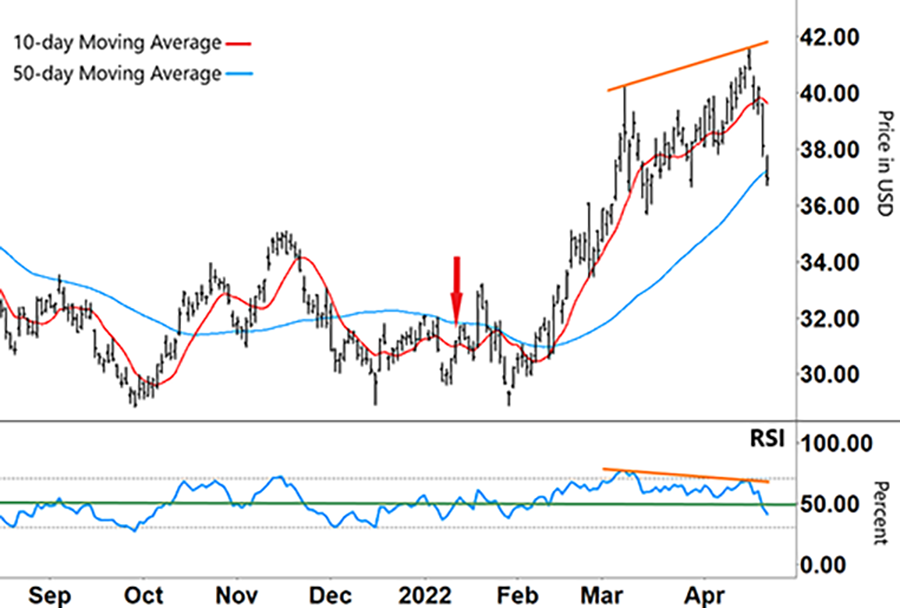 When we last checked in on GDX, it was tracking sideways (red arrow on the chart).

The strong rally in GDX began when the 10-day MA burst higher above the 50-day MA.

It was a strong rally based on the speed at which the 10-day MA broke above and away from the 50-day MA.

The Relative Strength Index (RSI), on the lower half of the chart, also signaled an emerging uptrend. The RSI broke back into the upper half of its range (above the green line) at the same time the MAs crossed over.

After peaking in early March, GDX briefly retraced before rallying to its current, yearly high on April 18 at $41.60.

At the same time GDX made its new high, the RSI made a lower high. The divergence between the two is marked by the orange lines on the chart.

This pattern often precedes a change in direction… which is what happened.

After making that high, it took a week for GDX to drop 10%.

The RSI recently broke below the green line – the first time it has traded below support since the rally began in February.

The steep drop in the RSI shows us how quickly the GDX buying momentum has evaporated this past week. For the current GDX fall to fizzle out, the RSI will need to bounce back above the green line.

But if the RSI stays in the lower half of its range, then this fall could have further to go.

The next test for GDX would be to maintain support at around $34. That was the level at which GDX consolidated in late February before going on to make its March high.

The recent fall has already seen GDX trade below the 50-day MA this past week.

If the 10-day MA crosses down over the 50-day MA, then GDX’s emerging downtrend would start to gain momentum.

Do you use gold as downside protection?