Andrew’s Note: If you had followed Larry’s work during the first half of 2022, you could’ve seen double- and triple-digit growth. That’s because Larry doesn’t follow the traditional “buy and hold” method to investing.

His secret takes less than 10 seconds and goes against everything a financial planner would advise you. He calls it his One Ticker Retirement Plan and it can potentially make you all the money you need trading a single stock – even in today’s volatile markets.

Click here to watch an exclusive interview where Larry reveals the name of his top ticker to get started.

Now, read on below to see what Larry expects next for the oil sector…

Only a few months ago, oil was the hottest ticket in town.

Oil companies were swimming in an ocean of cash as the price of crude pushed to its highest level in over a decade.

But after peaking in June, oil’s story quickly reversed.

Suddenly, it seems as though there’s more than enough oil to go around. Whereas previously, the shortage of supply led President Biden to visit Saudi Arabia.

In the last week alone, the Energy Select Sector SPDR Fund (XLE) dropped 10%. The price of oil is now trading back where it was at the time of the Ukraine invasion.

So, after such a massive swing, today I want to talk about what’s coming next for oil. 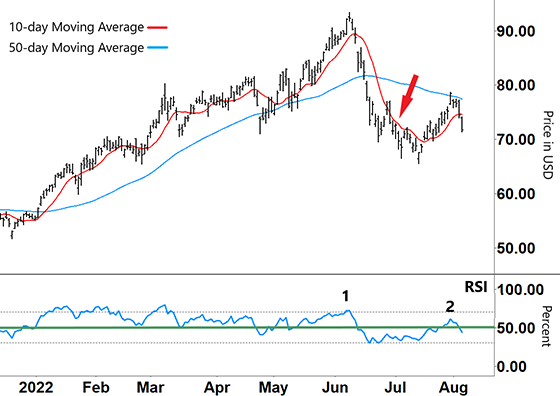 In January, the 10-day moving average (MA – red line) crossed above the longer-term 50-day MA (blue line) and stayed there all the way through June.

But then, XLE’s stock price quickly reversed when the Relative Strength Index (RSI) formed an inverse ‘V’ at (1) and reversed out of overbought territory (upper grey dashed line).

In only a couple of weeks, the RSI moved right down through support (green line) from overbought territory into oversold territory (lower grey dashed line).

This sharp reversal led the 10-day MA to cross back down over the 50-day MA at almost a right angle.

When we last checked XLE on July 6 (red arrow), the RSI was bottoming out around oversold territory and showing tentative signs of tracking higher.

Back then, we discussed that this action was trying to help XLE find a short-term base.

However, after a brief break back up through resistance in late-July, the RSI reversed again at a lower high (2) before falling back into the lower half of its band.

This action caused XLE to reverse sharply again. It also dragged the 10-day MA lower when it was on the verge of bullishly breaking back above the 50-day MA.

After this recent reversal, what am I expecting from here?

Well, over the coming weeks the most critical test for XLE lies with the RSI.

For July’s up move to regain momentum, it’s imperative for the RSI to break back up into the upper half of its range and stay there. We would also need the 10-day MA to break back above the 50-day MA.

However, if the RSI remains stuck in the lower half of its band, then we can expect XLE’s recent down move to gather momentum. This would lead XLE to retest its July low at $65.48.

But remember, with oil you can never be complacent.

Just as we saw with its sharp reversal in June, XLE can quickly turn and move the other way.

So, even if you get your trade direction right… don’t hesitate to bank your profits immediately.

When do you think we’ll see oil prices rise again?