When most stocks were tanking at the start of 2022, one sector was going through the roof.

Beginning late January, the SPDR S&P Metals and Mining ETF (XME) rallied an impressive 70%. In less than three months, XME was trading at its highest level in more than a decade.

However, this rally reversed sharply soon after. And although there was a counter-rally in May, it fizzled out in June.

When we last checked XME on July 13 (red arrow in the chart below), it was trading back at its pre-rally lows.

But after holding long-term support, XME is now showing promising signs of an emerging rally.

So, today I want to check out how this move is panning out plus what I’m looking for from here. 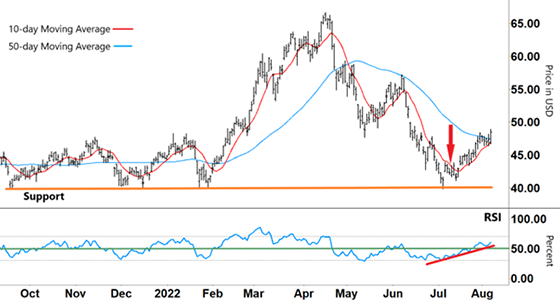 While XME was rallying to new highs, the Relative Strength Index (RSI) made a series of lower highs. This pattern often signals a change in direction ahead.

On July 13, we noted there were two things XME needed to rally:

As you can see on the chart, both scenarios played out. Take another look…

After XME held support and the RSI formed a ‘V’ (red line), XME rallied strongly. And this move could soon lead the 10-day MA to bullishly break back above the 50-day MA.

Now, what can we expect from here?

Well, the strong momentum that drove XME higher also pushed the RSI back into the upper half of its range (above green line).

So, for this rally to take hold the RSI needs to remain in its current range.

If the RSI instead breaks back below support, any rally will soon fizzle out and XME would potentially retest its long-term support (orange line).

If the 10-day MA crosses above the 50-day MA and accelerates higher, then that’ll show this uptrend is gaining strength… as well as provide the setup for a potential long trade.

But as always, even if we get our trade direction right, we need to be ready to take our profits as soon as we see them. Because in today’s market, any move can quickly turn on a dime.

P.S. Most people wouldn’t believe you can make extra money in today’s crazy market. But my experience shows me it’s a lot simpler than you’d think.

You don’t need to be a professional and you don’t need a lot of money. With my One-Ticker Retirement Plan all you have to do is focus on a single ticker at a time.

It breaks all the rules but can generate gains in any market. In fact, in 2008 this strategy helped me have one of the best years of my life.

To see how you can start making tons of money in today’s bear market, click here.

Do you think XME’s emerging rally will hold?