When we checked in on Tesla Inc. (TSLA) two weeks ago (red arrow in the chart below), it was in the middle of a meteoric rally.

In the space of just six days, it had rallied 30%… including an 8% rise on a single day.

That rally added hundreds of billions of dollars to TSLA’s value. And it was enough to put its market cap back above a trillion dollars.

Of course, these kinds of big moves in TSLA are not uncommon, even when they move in the opposite direction. Prior to this rally, TSLA had already lost around 40% of its market cap since the start of this year.

Today, I want to see how this recent rally is panning out.

We’ll also look at what’s next for TSLA. Because with TSLA’s big price swings – and with it about to test a key technical indicator – there will always be plenty of trading opportunities ahead.

So, let’s check out the chart… 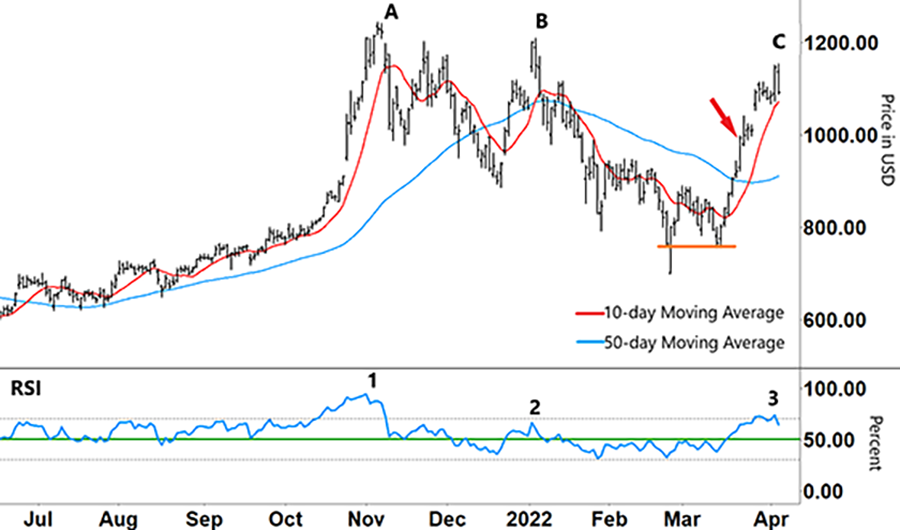 You can see that TSLA’s strong rally has continued since we first looked at the chart (red arrow).

After rallying off support (orange line), there were several things I was looking out for next…

With TSLA’s rise gathering momentum, I was watching our two moving averages (MA). The 10-day MA (red line) breaking above the 50-day MA (blue line) would confirm the uptrend.

That crossover occurred soon after.

I was also watching the Relative Strength Index (RSI).

First, the RSI needed to stay in the top half of its range (above the green line) if TSLA’s uptrend was to continue.

And more importantly, the RSI was about to face a key test…

With TSLA’s rapid rise, it was getting very close to overbought territory (above the upper grey line). This comes back to previous TSLA chart patterns.

So, let’s take another look…

As we had seen in the previous peaks at ‘A’ and ‘B,’ TSLA had reversed when the corresponding peaks on the RSI (‘1’ and ‘2’) had formed an inverse ‘V’ and subsequently fallen.

Right now, with TSLA potentially forming its next peak at ‘C,’ the action in the RSI is critical to what happens from here. Meaning, I’m watching to see if these previous patterns repeat.

If the RSI reverses, then we know that TSLA will soon follow suit. That could provide a promising setup to a potential short trade.

If the RSI were then to keep falling right through support and into the lower half of its band, that could mean a potential $200-300 fall.

However, if the RSI falls but stays in the top half of its band, then that has different implications…

First, it would mean that TSLA’s fall will be much smaller. While still profitable, we would need to be nimble and ready to exit a short trade at the first sign of any bounce off support (or even if the RSI simply forms a ‘V’).

And second, if the RSI does test support and holds, that could mean any pullback is done for the moment…

We would then need to see if TSLA forms a base as it did with the recent rally off the orange line. If so, we’d have to be ready to go long into any subsequent rally.

Today we hear from a subscriber of my spread-trading service, The S&P Trader…

Hey Larry,
I’m a complete newbie on the spread trading, but I’m loving all that you are teaching me over the last two weeks.