It sure has been a big week for Tesla.

After rallying 30% in just six trading days, its 8% gain on Tuesday was enough to re-join the trillion-dollar club.

It’s a very different story than in December…

Back then, Tesla was heading in the opposite direction.

As we noted at the time, Tesla was on track to lose one-third of its value by year end.

But after falling 29% from its November 2021 high (A) through its December low, Tesla moved up to a lower high (B) early this year.

However, up until this past week, it was all one-way traffic…

This time, Tesla fell by a staggering 40% (42% if you include the morning open on the first day of the Ukraine invasion) before it eventually found support (orange line on the chart below).

After such massive swings, today I want to check out what’s next for this never-boring stock.

Take a look at the TSLA chart… 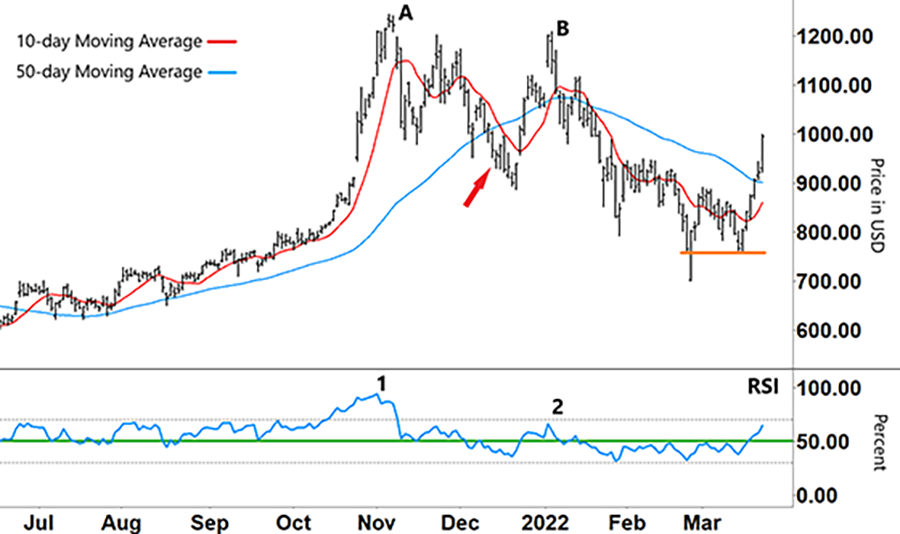 The Relative Strength Index (RSI) was trading in the upper half of its band (above the green line). Each time it tested support and held, that was the precursor for Tesla’s next move higher.

The long-term 50-day moving average (MA – blue line) was in a gradual uptrend too. The 10-day MA (red line) was tracking comfortably above the 50-day MA after breaking above it in June (a bullish signal).

Then, in October Tesla went on a tear…

You can see the speed of that rise in the gap at which the 10-day MA broke above and away from the 50-day MA.

The rally was so sharp that when TSLA eventually peaked at ‘A’, the RSI was at a staggering 94%! Remember that anything over 70% (upper grey line) is typically regarded as overbought.

However, the steady decline in the RSI that followed that spike (1) caused Tesla’s uptrend to turn into a downtrend…

But now, with the RSI bursting back into the upper half of its range – and the MAs getting close to a crossover – what can we expect from here?

Well, we know that for this uptrend to take hold beyond this current spike, the 10-day MA will need to break (and remain) above the 50-day MA.

Plus, the RSI will need to remain in the upper half of its band…

If both occur – with the RSI repeating a similar pattern to July through September 2021 – then Tesla’s spike could turn into a long-term uptrend.

However, Tesla’s next test will come if (and when) the RSI goes into overbought territory… which could happen soon.

We can see from both ‘A’ and ‘B’ that Tesla turned sharply lower only after the RSI formed an inverse ‘V’.

If this pattern repeats – with Tesla making a new lower high (which would become ‘C’), then the current sharp rally could quickly reverse…

Meaning that Tesla’s long-term downtrend that began in November 2021 would remain intact.

That would provide a potential setup for a short trade.

As always, just fantastic, and simple. Thank you very much, sir. I’m much obliged. Though I haven’t yet been able to become a member of your latest offering a month or so ago (due to affordability issues) – it’s a blessing to view your eletters. God bless you and all the family, ever more.