Many people have the wrong mindset when they first start trading.

So, my goal is to help everyday people avoid those mistakes by showing you my approach to trading.

In my previous essays, one of the things I focus on is understanding momentum… or more specifically, looking for changes in momentum.

To help with that, I’ve shown you two trading “tools” that can be useful for traders.

One of them is the Relative Strength Index (RSI). It gauges if a stock is overbought or oversold.

The second is the Volatility Index (VIX). Investors often refer to it as the fear gauge. Last week, I showed you how a spike in the VIX often precedes a fall in the S&P 500.

Today, I’ll show you a third “tool” that helps give me a better picture of the markets. That “tool” is the S&P 500 (SPX) option volume.

As it suggests, option volume simply tracks the number of options traded on any given day.

Now, before we pull up the chart, I’ll make one thing clear… option volume is important even if you don’t trade options. You’ll see why later on…

So, with that in mind, let’s take a look at the chart… 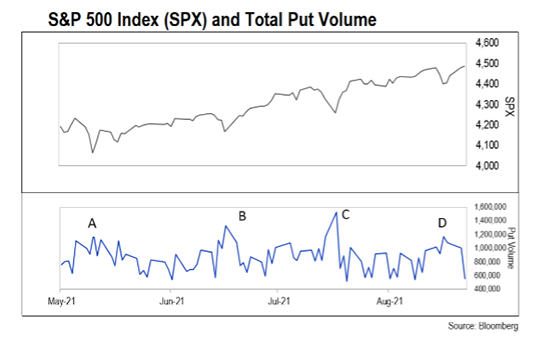 The price chart shows the SPX going back to late April. The blue line below it represents the option volume. In this case, the “put” option volume.

To make this as clear as possible, traders (and investors) simply buy put options when they expect the market to fall. The higher the number of traders expecting markets to fall – the more put options will trade.

In other words, put option volume is a gauge of market sentiment. And a change in sentiment can often lead to a change in direction.

On the chart, you’ll notice I have marked four put option volume peaks – ‘A’, ‘B’, ‘C’, and ‘D’. They’re important, but they’re only one piece of the puzzle.

What I find equally important is the volume on either side of these peaks.

Meaning, a change in put option volume sentiment often coincides with a change of market direction.

Just to be clear – using put option volume to gauge sentiment isn’t something you can use entirely on its own.

As the chart shows, it isn’t an exact science. While each of the peaks are similar, the patterns aren’t exactly the same.

But I can still look for a change in put option volume to help gauge a change in sentiment. That’s why I’ve been watching it all these years.

By using put option volume along with our two other trading “tools” – the VIX and the RSI – I can better determine when the market is likely to change.

Looking at multiple indicators and indexes helps me piece together the full picture. The result is that I have a better idea of where the market is headed next and can trade it accordingly.