Good traders should be able to recognize and take advantage of correlations across the market.

Last month, we looked at the correlation between gold and silver.

However, that was just one example.

Correlations exist throughout all markets… Like between bonds and equities, or currencies and commodities.

The more you look, the more of these correlations you’ll find.

One of the lesser known, but very useful correlations is that between the Nasdaq and the S&P 500.

It’s something I look at all the time.

Quite frankly, I’m really surprised that more traders don’t look at it as well. 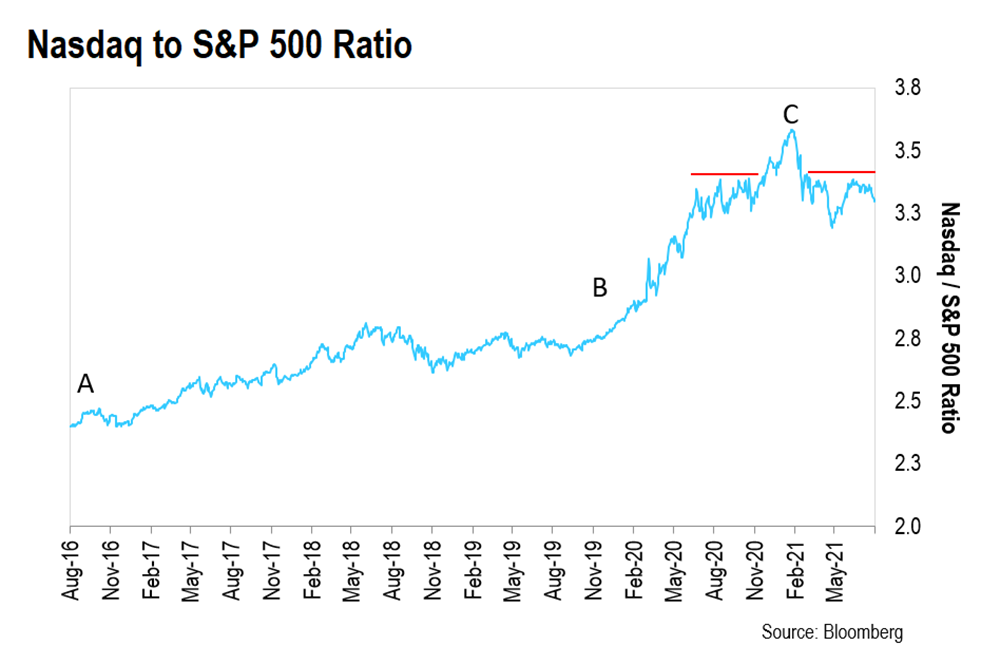 The chart shows the ratio between the Nasdaq and S&P 500 indexes going back five years.

What’s more, that move from B to C took only 13 months. That’s less than one-third the time it took to go from A to B (which took 41 months).

That’s a very dramatic change in such a short time.

Of course, that could mean the Nasdaq was potentially running too hard and fast against the S&P 500 since the start of 2020.

On the chart, you’ll notice that the ratio (blue line) has traded sideways on either side of the peak (‘C’).

Then, after peaking at C, the blue line fell just about all the way back to the same level (3.25) before trading sideways again.

This is what technical analysts refer to as a head-and-shoulders pattern. Essentially, the C is the head, and the sideways action on either side would be the shoulders (red lines on the chart).

Quite often, this pattern can indicate a major trend reversal.

In this case, that would be mean a change in trend from a bullish pattern to a bearish one. And, the Nasdaq could start to underperform the S&P 500.

So, what does that mean for traders?

As with anything in the markets, though, there are no guarantees.

No technical indicator or analysis works 100% of the time.

However, as a trader, this kind of information is invaluable. By looking at correlations, it can help put you on the right side of the trade.