At the beginning of the year, inflation just wasn’t on the radar for many investors and homeowners…

After all, a 1.4% inflation rate in January was nothing out of the ordinary compared to much of the last decade.

But as inflation quickly rose to 4.2% in April, suddenly it was all over the news.

Unless inflation is reined in, you can be sure that interest rates will rise. The only question becomes the timing.

In the chart of the iShares U.S. Home Construction ETF (ITB) below, you can see how the demand for new homes was growing steadily right up until its peak in May (A).

As inflation became a factor, the demand for new homes decreased. This caused ITB to change its direction from an uptrend to a sideways pattern. 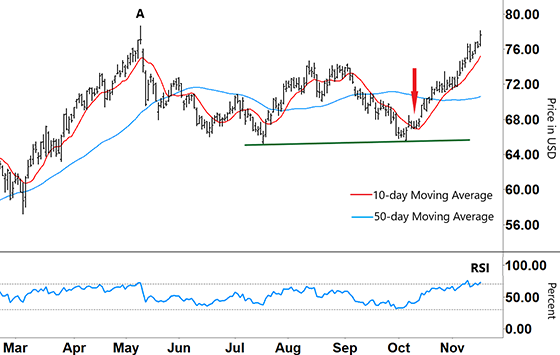 When we last checked in on ITB (red arrow), it had just tested and held support (green line).

Back then, holding that support level was key. A break below that could have seen ITB testing its lows from March.

As it turns out, ITB held that support and the Relative Strength Index (RSI) rose all the way across its channel from oversold to overbought. Along with the 10-day MA (red line) crossing above the 50-day MA, this RSI action propelled ITB’s share price close to its all-time high in May (A).

So, what are we looking for next?

Most recently, the RSI is tracking right over the upper grey line (overbought signal).

While it’s still early, I’m watching to see if this could turn into a repeat of the pattern from mid-March to May. Back then, the RSI also tracked along the same overbought line while ITB kept rallying.

If the RSI were to continue tracking the upper grey line as it’s doing currently, the next test for the continued rally in ITB is to break through that May high of $78.61.

However, if ITB fails to break higher than its May high and the RSI turns down, then that would confirm the current rally is over.

That would also mean ITB’s sideways pattern remains intact. A short trade to capture ITB’s reversion to the mean could then be in order.

Either way, this current price action is interesting for a number of reasons… And that comes back to the interaction between interest rates and inflation that I mentioned earlier.

There are two schools of thought here for new home buyers…

They can believe the Fed when they say that inflation is transitory… meaning interest rates won’t rise anytime soon.

Or they can believe inflation is going to keep increasing, and they want to buy their new homes now before prices rise any further.

However, if inflation keeps rising, then eventually a crunch will come…

Houses will become too expensive to buy. Interest rates will rise too, adding to the dent in demand.

Not only will that mean a slowdown in new home construction, but also for those companies that supply the industry.

If and when that happens, then it could mean a big correction in ITB… and the chance to capture the move by placing a short trade.

Do you think housing prices will burst, or will inflation eventually slow down?