At the start of 2020, the SPDR S&P Retail ETF (XRT) was trading relatively flat…

But after an initial dip in the first quarter of 2020, XRT went for a massive run. In about a year, XRT rallied 270%.

However, after such a huge jump XRT spent most of 2021 trading in a tight range. Although XRT rallied again into the end of 2021, it’s been pretty much one-way traffic ever since.

From its November 2021 peak to its recent low, XRT has now fallen almost 40%.

Retail sales are important to consumption and the economy. So, today I want to see what’s coming next.

In XRT’s chart below, you can see its long-term downtrend… 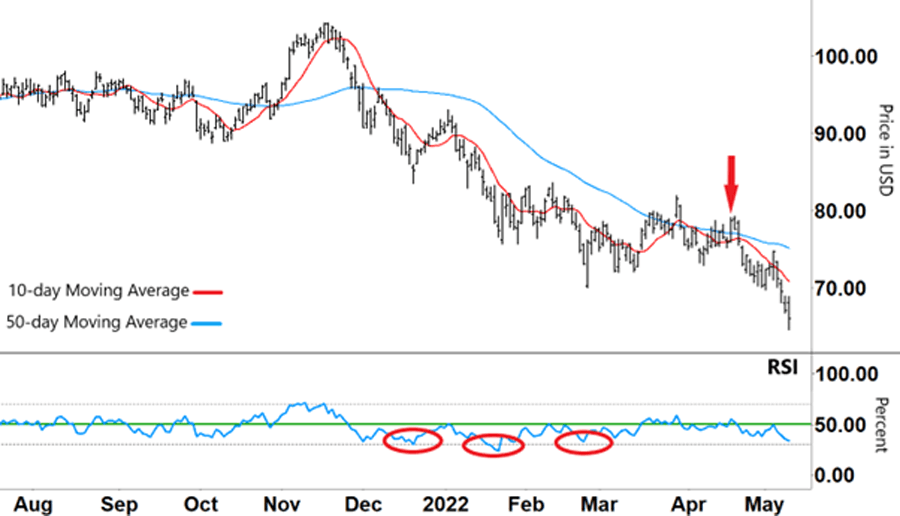 XRT’s downtrend from its November peak began when the Relative Strength Index (RSI – in the lower section) inverted from overbought territory (on or above the upper grey dashed line).

The down move then accelerated as the RSI broke down through support (green line) and into the lower half of its range.

The bearish sentiment from the RSI coincided with bearish signals from our two moving averages (MA).

That crossover was soon followed by the 50-day MA trending down, and the 10-day MA stayed below the 50-day MA all the way through March.

When we last checked XRT on April 21 (red arrow), the 10-day MA had just briefly crossed back above the 50-day MA.

At the same time, the RSI briefly broke above resistance…

For XRT to have any chance of rallying, we wanted to see if the RSI could remain in the upper half of its range. A break back into the lower range would see selling pressure again…

As you can see, the RSI ran out of momentum and has since made a series of lower highs.

So, the RSI’s most recent high on May 4 was a rebound lower off resistance (another bearish signal).

And that’s what pushed XRT’s share price lower again since the start of May.

Well, our two MAs show a familiar pattern, and a clue.

Since crossing down over the 50-day MA, the 10-day MA is now moving further below and away from the blue line (a bearish signal).

The next test for XRT lies with the RSI…

Right now, the RSI is closing in on oversold territory (on or below the lower dashed grey line)… the three red circles show what happened the last time this scenario played out.

In each case, the RSI formed a ‘V’ and then trended higher. But that momentum faded out around resistance.

If that pattern repeats with XRT’s current move, then that could provide an opportunity for a quick countertrade against the major downtrend.

However, remember to wait for the ‘V’ – and any subsequent rally in the RSI – before committing to any long trade. And don’t forget to take any potential profits off the table quickly.

Despite its near 40% fall this year, XRT is trading way above its pre-pandemic highs.

But interest rates are still going up, and consumers will continue tightening their belts.

How have you adjusted your consumption to the new interest rates? Will you cut retail spending from your budget?