Personal consumption, which accounts for about 70% of GDP, plays a massive part in the performance of the economy and markets.

Yesterday, we looked at discretionary spending – an important part of personal consumption.

Today, I want to turn our attention to another key component… retail sales.

When we last looked at SPDR S&P Retail ETF (XRT) on March 28 (red arrow on the chart below), the trend was clear.

After peaking on November 2021, XRT fell heavily. The prospect of rising interest rates in response to rampant inflation caused investors to desert the sector in droves.

From its November high to February low, XRT fell 30%.

On the chart below, XRT’s major downtrend is represented by the falling 50-day moving average (MA – blue line).

Let’s take a look at the chart… 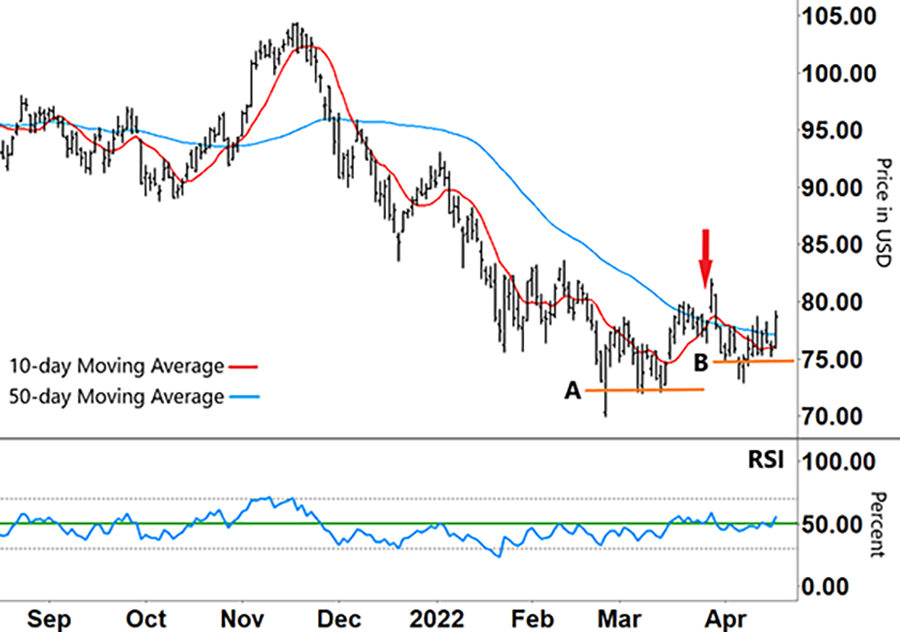 After hitting those lows in February, XRT started to find a base. By the time we checked on it (red arrow), XRT had begun to rally.

Back then, we were looking to see if the 10-day MA (red line) would soon break above the 50-day MA – a bullish signal.

Although the 10-day MA did briefly break above the 50-day MA, it soon fell back the other way.

I was also watching the Relative Strength Index (RSI) at the bottom of the chart. It helps identify whether a stock is overbought (over 70%), oversold (under 30%), or neutral (50%).

The fall from XRT’s peak in November coincided with the RSI inverting from an overbought position (when the RSI is on or above the upper grey line).

With the RSI breaking below support (green line) and falling into the lower half of its range, XRT’s fall continued.

However, RSI’s profile has since changed.

Over the past month, it has been tracking along that green support/resistance line closely. And in the past couple of days, it has broken into the upper half of its band again.

Well, we know that if XRT is to rally from here, the RSI will need to stay in this upper range. If it fails, then we can expect XRT’s long-term trend to remain down.

In December, that support level was around $85. The next was around $78 from January into February of 2022. But both levels ultimately failed.

That type of pattern is common in a down move.

After falling, a stock consolidates around a level before breaking lower again.

It works the opposite way in an uptrend. After rallying, a stock will often hover around a key price level before going on to rally higher.

Right now, the two most recent support levels – have caught my eye.

‘A’ is the level off which XRT rallied in March. But that rally fizzled out soon after we looked at it. So, what happens at ‘B’ is pivotal to XRT’s next move.

For any rally to gain momentum from here, first XRT must hold this current price level.

However, for a rally to take hold, each successive support level will need to make a higher high… like it did from ‘A’ to ‘B.’

If XRT breaks below support at ‘B’ instead, then it’ll soon test ‘A.’

A break below that would mean that the current price action is simply a countermove against the major downtrend.

Which way do you think XRT will go?