Over the past few years, there’s been a huge focus on tech stocks…

With many other profitable sectors flying completely under investors’ radars.

And that means plenty of missed opportunities… like the ones in financial services.

Although the Nasdaq delivered a healthy 27% return in 2021, the Financial Select Sector SPDR Fund (XLF) generated an even bigger 32% over the same time.

While investors were chasing the next big-growth tech story, XLF simply passed them by.

However, after a stellar 2021, this year has been rough on XLF so far.

Initially, XLF held up far stronger than the rest of the market (including tech stocks) during the first few months of the 2022 selloff…

But now, XLF is under huge pressure since mid-March.

Today, I’m going to see if this big drop presents another potential buying opportunity… or if it’s just another false dawn in an ongoing downtrend. 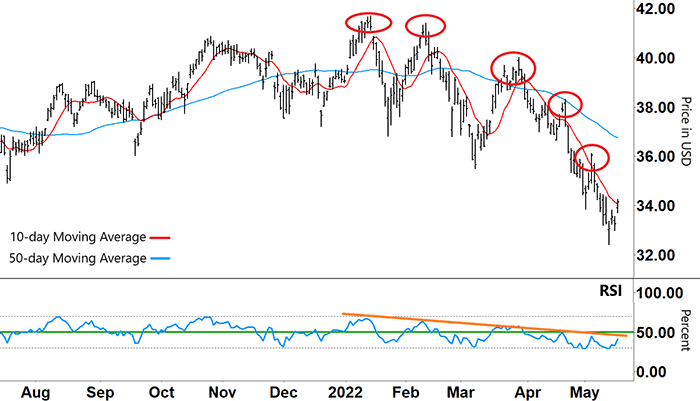 XLF peaked in mid-January… but, after hitting that high, it made a clear series of lower highs (red circles) – a common pattern in a downtrend.

After steadily rising throughout the end of 2021, the long-term 50-day MA (blue line) flatlined through January and February 2022 before rolling over in March.

And after zig-zagging multiple times, the 10-day MA finally broke down over the 50-day MA in early April.

Since then, it’s been accelerating further below the 50-day MA – showing the downtrend’s strength.

However, over the past few days XLF bounced as the RSI rallied out of oversold territory (below the lower grey dashed line).

So, will this current bounce fade out like all the previous ones? And how should we trade XLF from here?

The orange line shows the RSI is in a downtrend. It’s been making lower highs for over four months now.

If the RSI breaks above this resistance (orange line), we could see more buying momentum support XLF’s price.

And if the RSI then breaks into the upper half of its range (green line), XLF could soon trade back around $35-$36.

But, if the RSI forms an inverse ‘V’ at resistance and rebounds lower, that means this current downtrend has further to go. We would need to be ready to sell into the rally.

After such a big fall, the RSI is showing XLF is due for a bounce.

But a quick reversal lower could make this bounce fade out just as quickly, causing further falls ahead.

So, in the coming days we’ll need to watch the RSI like a hawk… and be ready to take action on either outcome.