About a month ago, we checked in on the Consumer Discretionary Select Sector ETF (XLY).

It’s a sector that I always watch closely for a couple of reasons.

First, it acts as a gauge of consumers’ confidence in the overall health of the economy – something that has a direct bearing on the markets.

Second, is that it relates to how XLY is constructed.

Around 40% of XLY’s holdings are tied up in just two stocks – Amazon (AMZN) and Tesla (TSLA). Meaning XLY’s movements depend heavily on their performance.

Since Tesla is due to report earnings today, followed by Amazon next week, there could be plenty of trading opportunities in XLY over the coming weeks.

The last time we checked in on XLY (red arrow on the chart below), we saw how it had dropped 24% since the start of 2022.

After bouncing off support on the orange line, XLY rallied strongly… 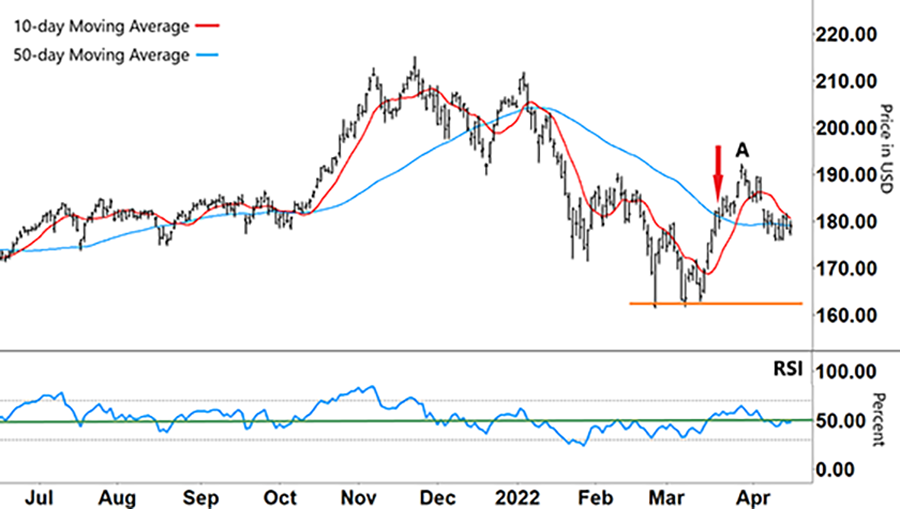 We were looking to see if that was the start of a new uptrend or a relief rally, before XLY ran out of steam.

But as the chart shows, that move up fizzled out with XLY peaking at ‘A.’ From there, XLY rolled over and began to trade down.

That price action reflected the movement in the Relative Strength Index (RSI) in the lower half of the chart.

Although the RSI had broken into the upper half of its band in the rally up to ‘A’ – it couldn’t maintain its momentum. Instead, the RSI inverted, drifted lower, and is now tracking right around its support level at 50% (green line).

So, the action of the RSI is key to how things play out from here.

For an uptrend to gain traction, the RSI needs to stay in the upper half of its range – just like the strong rally in XLY we saw from last October to November.

If XLY can rally off the results of Tesla and Amazon, then the first target will be ‘A.’

A break above ‘A,’ with the 10-day MA (red line) breaking further above the 50-day MA, could see the re-emergence of XLY’s uptrend that began in March.

And that could provide an opportunity to go long.

However, if the RSI falls through support and stays there, then the chart already provides strong clues on what to expect.

When the RSI fell through support in January, it was followed by the huge fall in XLY.

Despite some countermoves along the way, the RSI stuck to the lower half of its band, and XLY’s overall trend remained down until mid-March.

If the RSI breaks lower from support, then that could prove a strong setup for a short trade.

The next test becomes XLY’s previous support level depicted by the orange line.

A break below that – with the RSI remaining in the lower half of its range – could see a stronger downtrend emerge over the coming months.

But for now, we’ll concentrate on more immediate action.

With the RSI trading on support, XLY is right at the crossroads. A surprise in either Tesla’s or Amazon’s results could set off a market-changing move.

What are your thoughts about the trend in Tesla and Amazon?