The mega-cap tech stocks did most of the heavy lifting in the near two-year market rally that started in 2020.

The prospect of higher interest rates – brought on by runaway inflation – has a far bigger (and negative) impact on the valuation of high-growth tech stocks.

But from late last month into March, the Invesco QQQ Trust Series 1 (QQQ) started to form a base. It’s rallied strongly over the past week.

Today, I want to see if this rally can keep going or if it’s just a short-term relief rally before QQQ rolls over. 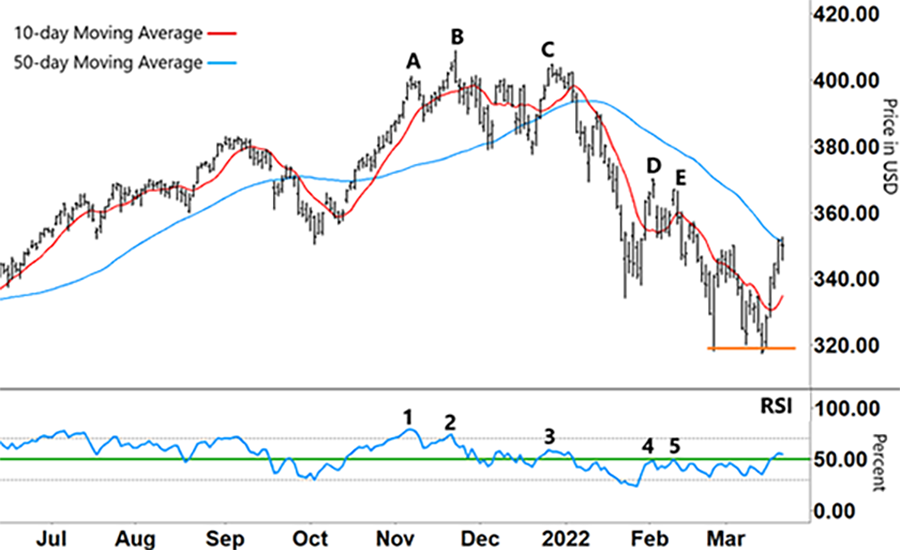 Much like the chart of XLY we looked at yesterday, the divergence between the Relative Strength Index (RSI) and stock price caused the massive change in direction.

That declining momentum saw QQQ make a lower high at ‘C’ that coincided with ‘3’ on the RSI.

From there, as the RSI fell into the lower half of its band below the green line, QQQ’s share price also began to fall heavily. That’s what generated the heavy selling we saw at the start of this year.

Only when the RSI went into oversold territory in late January (below the lower grey line), did both the RSI and QQQ’s share price subsequently bounce.

With the RSI rallying up to resistance twice (4 and 5) – but failing to break higher – QQQ’s rally also ran out of steam. The short-term rally petered out at ‘D’.

Having rallied strongly off that support, we’ve now seen the RSI break back into the top half of its range.

So, what will determine QQQ’s price action from here?

First, for QQQ to keep rallying, the RSI will need to stay above that green line. If the RSI can do that, then the next test for QQQ is to take out its most recent highs at ‘E’ (followed by D).

We’d then need to see the 10-day moving average (MA – red line) break back above the 50-day MA (blue line) to confirm an uptrend.

However, we need to keep things in perspective…

While QQQ and the rest of the market has enjoyed a nice little shot in the arm this past week, we still have sky-high inflation and much bigger rate rises to come… potentially 0.5% next month.

Unless the next earnings season surprises massively to the upside (which seems unlikely), I just can’t see the catalyst that will propel QQQ back into a long-term rally this year.

That means we need to be ready to sell into any rally.

If this current sharp rally fizzles out before reaching ‘E’ – and the RSI returns to the lower half of its channel – then that could offer the setup for a short trade.

I’ve had great returns from the S&P Trader and The Opportunistic Trader, with a net gain of $15,640 from my first Quadruple Witching Day trade. I’m grateful for every trade.

The Quadruple Witching Day trade illustrates the potential of profiting from the SPX index fund.

I’m looking forward to future trades and the next Quadruple Witching Day trade.