Mike’s note: Before we get to today’s essay, I wanted to quickly remind you to sign up for tonight’s Trade-a-Thon at 8 p.m., if you haven’t already.

Larry will reveal the results of perhaps the biggest challenge of his career – and the techniques he used to overcome it.

Now, on to today’s essay…

It pays to listen to Larry on matters like this. During the 2008 financial crisis, while most folks were losing everything, Larry’s hedge fund enjoyed their best year ever… making $95 million for themselves and clients. So he knows how to avoid the traps most traders fall prey to, even when the odds are stacked against him.

How to Protect Your Most Valuable Asset

You’re probably thinking the latter. But, if you’re like most traders, you’re more likely to wind up in the former camp.

A lot of traders fail to implement an important economic concept into their trading discipline. And as a result, they hold onto bad trades too long and take a big hit on their overall P&L (profit and loss).

So while it might feel like they’re making a bunch of money on one or two home-run trades per year… When you factor in the losers, they’re actually making much LESS than they could be.

Now, my idea of the time value of money is different from the broader economic concept – though they are somewhat related.

I think of it more as how much time and capital you’re willing to allocate towards making a certain profit on a trade.

So, you have three variables… time, capital, and profit target.

Essentially, you must look at how long you can afford to sit in a trade to make it work. This strategy can be applied to a winning trade that you’re up on, or a loser that you’re down on.

So, let’s say you’ve made some gains on a trade, and you’re wondering if you should stay in it longer to get a little more upside.

Remember… you should only stay in if you’ve earned your risk by having a solid pile of capital and a string of good trading days. Otherwise, you’re wasting time that should be spent reallocating that capital into a better trade idea.

If you haven’t earned that risk, you should just take the gain. Every win, no matter how small, contributes to your capital pile and enables you to eventually take on more risk.

Again, if you’ve built up a good cash pile, you can afford to wait for a turnaround. But if not, you should just take the small loss and move on to another trade that has greater profit potential.

The most valuable asset you have isn’t money – it’s time. And if you’re wasting time as your money wastes away alongside it, your overall profit potential diminishes.

That combination is one of the biggest things that takes new traders out of the game.

Going Against the Grain

I go against the grain compared to most traders.

Most traders are looking to make 3,000% on that home-run trade. That happens, what, every three years maybe?

As the days go by, and as you hold a position longer, you’re not only adding more risk to an already solid profit… you’re also keeping yourself from redeploying that profit into another opportunity.

Why wait? I can pocket those gains, and possibly redeploy that money for even more gains. That’s the discipline and consistency I’m talking about. The potential for those trades to all reach triple digits is too low not to put a profit on the page now.

The time value of money is all about considering the opportunities that may be missed. It’s making sure a winner doesn’t turn into a loser… Or preventing a loser from getting much worse.

The Right Frame of Mind

I’m not solely focused on getting the home run. I want to capture gains when I have them.

That might not sound as exciting as hitting doubles and triples on every trade you make, but it’s realistic.

The time value of money is the culmination of discipline and consistency. It’s strategic. You pick a number you’re not going to go past on the upside and the downside, and you execute – no matter what. You don’t let your emotions interfere with that plan.

With this strategy, you’re slowly pulling in profit after profit. That’s how you size up your pile of capital, eventually take on larger and riskier position sizes, and see exponential growth in your trading account.

And you know what? The gains might not look huge on a percentage basis…

But when you have a big enough cash pile, those small percentages can amount to millions of dollars.

It’s all about using the money you have to make more.

If you’re in a losing position right now and hoping for a turnaround, get out. Save that money for another opportunity. You’ll be glad you did…

P.S. I’ve built my wealth over the last 35 years through discipline and consistency.

Not from a single blowout trade… or some “algorithm” that doesn’t make sense… or any other gimmick I’m sure you’ve seen before.

And tonight at 8 p.m., I’m finally coming forward to show how to use what I’ve learned to become a consistently profitable trader.

I’ll also reveal the results of my challenge to generate at least $70,000 over a single trading session to donate to a local charity, Boca Helping Hands.

There’s no cost whatsoever to attend. In fact, just for stopping by, you’ll get a free copy of the 50 stocks you need to start trading today if you want a solid chance at becoming successful.

I look forward to seeing you there…

In Case You Missed It…

Don’t attend the Trade-a-Thon until you see this

But BEFORE you watch, you should understand what Larry plans to do with his profits that day, and what it means for your wealth.

You may not agree with Larry’s plan…

But today, he’s personally inviting you to have a look.

After making $274 million, Larry knows he’s been lucky in life.

(Although, is it really luck when you go for 20 years without losing money? He’s one of the greatest traders ever, profiled alongside billionaires Ray Dalio and John Templeton.)

But… Larry believes in “giving back.”

So he’s agreed to do something VERY SURPRISING with the $70,000 profit he hopes to make in our December 11th Trade-a-Thon.

See for yourself… and what it means for you. 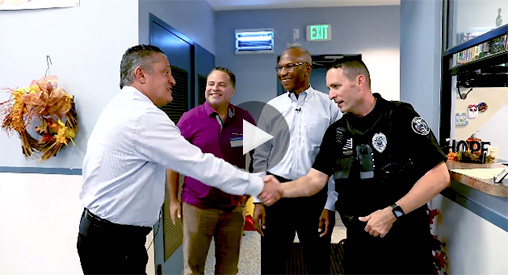