I wrote about one of those sectors last week when we looked at utilities. For one of the most regulated sectors in the market, it certainly moves around.

To keep track of the sector, I use the Utilities Select SPDR Fund (XLU).

When we looked at XLU last Wednesday, it was in the middle of a strong decline.

Today, I’m going to follow up on that to see what has happened since then… And, more importantly, discuss what could be in the cards from here.

So, let’s pull up the chart… 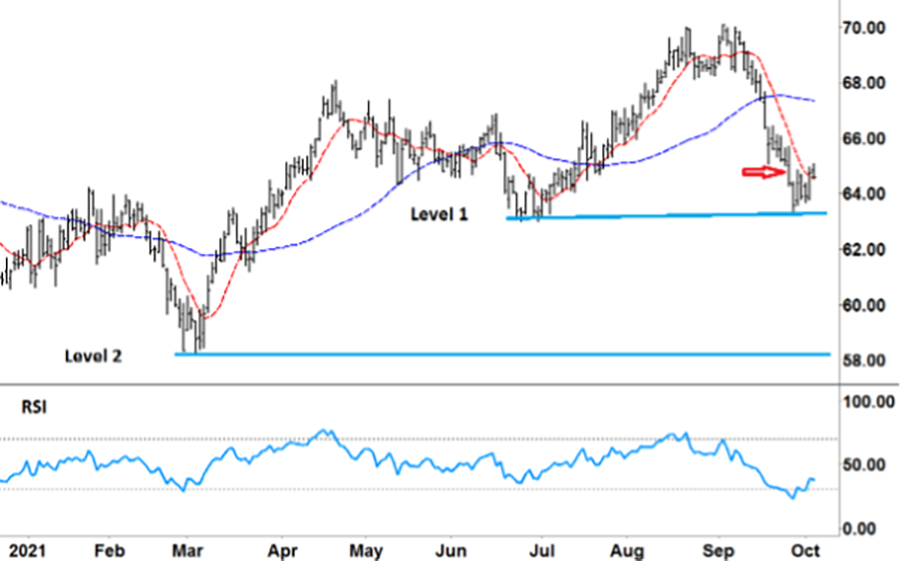 The 10-day moving average (MA – red dashed line) had crossed down through the 50-day MA (blue dashed line) at a very steep angle.

The Relative Strength Index (RSI) – at the bottom of the chart – had also just moved below the lower grey horizontal line and was still heading down.

I was looking to see if XLU could hold at level 1 (upper blue horizontal line).

There’s a reason this level was important… XLU had tried to sell down through this level throughout June and July but failed.

Instead, XLU formed a base and went on to rally to its September high.

Let’s take another look at the chart, and consider its recent action…

During the past week, XLU again bounced off this same level (level 1). That coincided with the RSI forming a “V” from an oversold signal.

(I know I talk a lot about how important price levels are – and I hope this chart shows why!)

Since then, XLU has tentatively been moving higher.

Right now, it’s just too early to know if this bounce will turn into a genuine move higher… or if XLU’s rally will peter out.

That’s why what happens next is key…

For an upward move in XLU to gain traction, first it must hold above support level 1. Despite the bounce, XLU is still trading close to that support line… and there’s every chance XLU will test this level again.

If that support holds, next we’ll need to see the 10-day MA move back above the 50-day MA. That will be the first sign of an emerging uptrend.

However, if XLU breaks below that level 1 support, that brings a much bigger potential down move into play…

The next support (level 2) is at $58.25, which corresponds with XLU’s March low. That’s around 10% below its recent share price.

If XLU holds support (level 1) and continues to rally, that could provide an opportunity to go long.

However, a break below that support could very quickly provide a setup to go short.

For now, though, we’ll have to wait and see.

And with XLU still close to the support level, either scenario could unfold quite quickly. That’s why I’ll be watching XLU even more closely over this coming week.