When the Fed began its extraordinary money-printing program during the COVID pandemic, stocks weren’t the only assets that enjoyed a huge boom.

However, the sector lost a lot of that heat once the Fed began tightening screws this year.

When we last checked IYR on July 5 (red arrow on the chart below), IYR had rallied off those June lows and was about to test a key level.

Today, we’ll check out where IYR is heading next as we look for potential trades…

Take a look at IRY’s chart below… 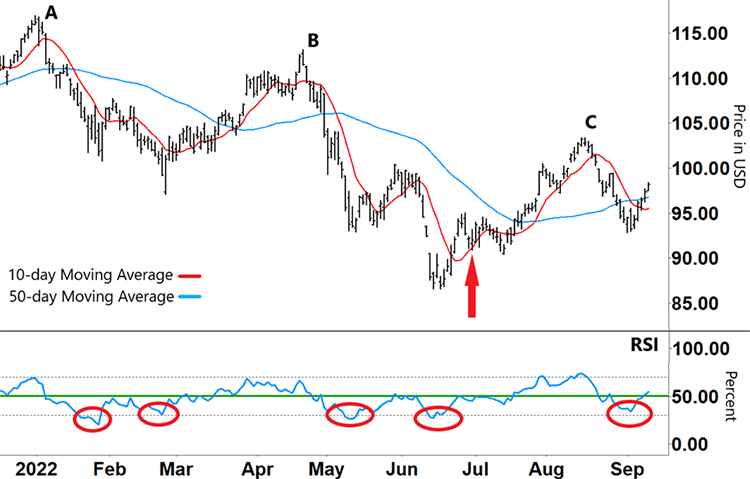 After hitting its all-time high at ‘A,’ IYR made a series of lower highs (‘B’ and ‘C’), which is a classic bear pattern…

And although there have been countertrends, the 50-day moving average (MA – blue line) shows IYR was in a major downtrend from the beginning of the year to July.

The Relative Strength Index (RSI) formed an inverse ‘V’ at the same time IYR made its high at ‘A’ and when it made lower peaks at ‘B’ and ‘C.’ Each time, it reversed from overbought territory (at or near the upper grey dashed line).

However, I’d like to concentrate on the RSI’s oversold portion today (lower grey dashed line).

Let’s take another look at the chart. The red circles show where IYR rallied after the RSI formed a ‘V’ in oversold territory…

Sometimes – like in January and May – those rallies petered out when the RSI ran into resistance (green line) and couldn’t penetrate higher.

And other times – like in February and June – the RSI eventually broke through into the upper half of its range. That’s when IYR went on to rally to those peaks at ‘B’ and ‘C.’

Earlier this month, the RSI formed another ‘V’ near oversold territory, which saw IYR bounce. And just recently, the RSI bullishly broke back through resistance and into the upper half of its range.

So where is IYR headed next?

Action Around Support and Resistance

The action around RSI’s support and resistance is key.

If the RSI can remain in the upper range, then these signs of an emerging rally could convert into a bigger move.

The longer the RSI remains in the top half of its range, the bigger that rally should be. The next big test for IYR is to take out its previous high at ‘C’ at around $103.

Although the 10-day MA (red line) has just broken below the 50-day MA, the MAs could cross back the other way if IYR moves higher – adding further weight to any uptrend.

However, if the RSI fails to stay in the upper range and instead breaks below support, then any rally in IYR will likely be short lived.

Either way, with the Fed’s next meeting just a week away and another mega rate rise in the cards, the RSI (and IYR) won’t stay around its current level for long.

A break in either direction could then provide a strong setup for a potential trade.

Do you think we’ll see another huge boom in the real estate sector soon?