Whether you’re stuck at home or free to move around, one thing is for sure… America’s love of coffee isn’t slowing down. On average, around two-thirds of consumers enjoy a cup of coffee every day.

But with California and Hawaii being the only U.S. states with the rich, volcanic soil required to grow coffee, that means much of that supply must come from abroad.

While Vietnam and Colombia are major coffee producers, by far the biggest grower (and supplier to the U.S.) is Brazil which produces around 60% of global production.

This means that coffee prices aren’t just dependent on growing conditions in Brazil (and Vietnam and Colombia)… Any disruption to shipping channels and/or rise in fertilizer costs will drive up the coffee price too.

And it’s already happening this year…

As you can see in the chart below of the iPath Series B Bloomberg Coffee Subindex Total Return ETN (JO) – an Exchange-Traded Note (ETN) that tracks the coffee price – JO has continued to trend higher since April. 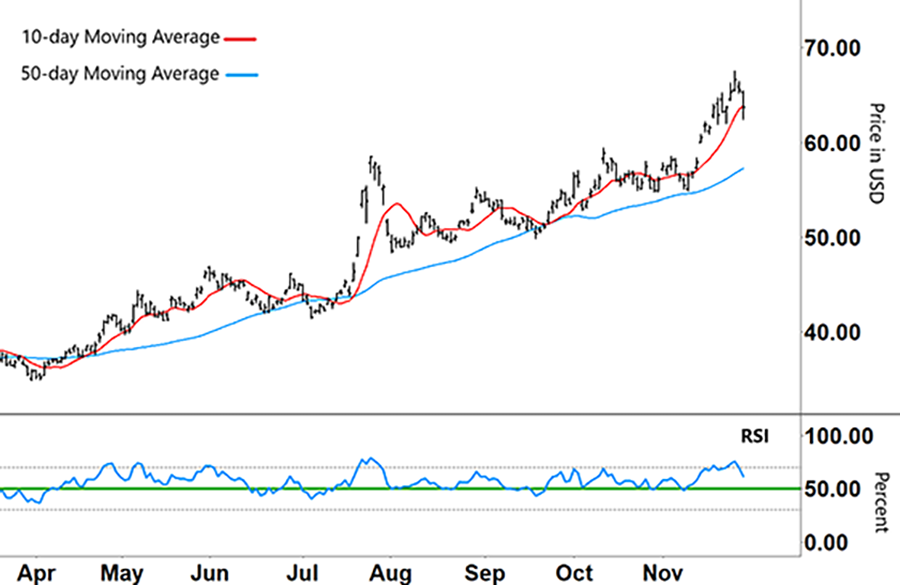 After hitting its recent high of $67.45 less than a week ago, JO has gained 80% since the start of the year…

Tracking flat for most of 2020, the long-term 50-day moving average (MA – blue line) began its most recent move higher this past April. Apart from a few brief dips, the short-term 10-day MA (red line) remains above the 50-day MA over this time.

What the chart also shows is that throughout this rally, the Relative Strength Index (RSI) remains above the green support line.

When the RSI bounces off this support level and forms a ‘‘V’’, we see JO’s share price rally. And, when the RSI went into overbought territory (above the upper grey horizontal line) – as it did throughout May, June, and late July – JO’s share price turned down.

And now, JO is overbought after it peaked on November 24. So, what can we expect from here?

As the chart below shows, after hitting that high, JO’s price turned firmly down. The RSI also formed an inverse ‘‘V’’ and is moving sharply lower… It could soon test support at the green line.

Most recently, when the RSI bounced off this support in October and November, that coincided with a subsequent rally in JO’s share price. For JO’s long-term uptrend to remain intact, we’ll need to see similar action around the RSI support level.

As the chart shows, even if the RSI meanders along this line, that can often mean it’s forming a base so that an upturn in momentum (RSI) could drive the share price higher. If this pattern repeats, then that could provide a place to go long.

However, if the RSI were to break below this support, then that brings a potential down move into play. The last time the RSI tracked down to the lower grey horizontal line (oversold signal) was back in June of last year.

Back then, JO was trading around $30, less than half its current level.

If the RSI were to break this 50% support level, then the next test for JO involves the moving averages…

The 10-day MA crossing down over the 50-day MA (along with declining momentum in the RSI) would be a bearish signal and could see the end of JO’s current seven month rise. That scenario would likely prove a good place to go short…

Either way, with the RSI quickly closing in on support, we’ll find out soon enough which way JO is heading next.

Just be aware that JO is a futures-based product. So much like we recently discussed with the Teucrium Wheat Fund ETF (WEAT), you would typically use JO to capture shorter-term moves – not as a buy and hold investment.

I’m always excited to hear positive feedback from my readers. Here’s some of the latest responses…

I appreciate the simplicity of your essays. Thanks a lot!

Keep the eletters coming! They’re to the point, brief, and readable. The information is much appreciated.

Thank you for your hard work and the good advice.